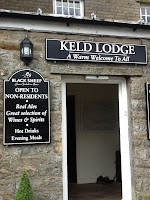 The meals at the Keld Lodge were quite good. I have to note because of the at atmosphere I was expecting the typical “pub” grub choices. The restaurant there is a step up though. I had chicken breast with a garlic sauce wrapped in Parma ham with vegetables. It was so nice to get a big plate of beans, cauliflower, and carrots rather than a side of chips. My arteries were very thankful.

The lodge itself was a converted youth hostel dating back to the Methodist settlement that Keld actually is. In fact Nick, the proprietor, mentioned that the village was “dry” until the 1970’s. I then celebrated the end of that dark time in history by ordering a pint of Black Sheep Bitter.

I also have to give a shout out to Nick as he was fantastic.  As soon as we had arrived he sorted out our wet boots, got them in the drying room for us, and made sure we got settled right proper.  Another place you’ll want to stay when traveling on the Coast to Coast! 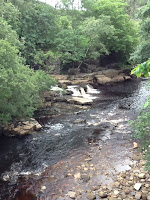 We set off in the morning after breakfast by walking through Keld itself. As small as the village was it had not one but TWO Methodist chapels. Apparently even when there are only 40 or 50 people in a village, the opportunity to “church hop” is made available.

We were now out of Cumbria and into Yorkshire. We had the option at this point of taking the “high” route or the “low” route along the river valley. As we’ve had no lack of elevation throughout the last week, we decided that the “low” route was the one we would take. Seems like that was the route of choice as we met many of our fellow hikers coming out of Keld. There are “the dog ladies” not because of their appearance, mind you, but the fact that they are doing the walk with their two dogs. We seemed to be dogging (no pun intended) their steps since The Nine Standards the previous day.

We had a leisurely walk through the valley and it’s good thing too as Gabriel has started to have back troubles. In straight- a- ways I have been carrying his pack as well to give him a break. Now my back is starting to act up. Ibuprofen time!!!

We stopped at a pub in Gunnyside and it seemed everyone else had as well. Many familiar faces from the last couple days were already there enjoying a break from the wind as well as some refreshments. After about 45 minutes we departed (you can tell it was a shorter walk day as we would never have stopped so long on a longer milage day) and headed down the road to Reeth. 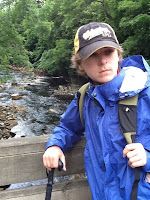 We missed the turn off onto the Coast to Coast path and were 1/4 mile down the road before we realized our mistake. Rather than double back to the trail, we decided to walk the last 6 miles on the road instead taking us right into Reeth. In fact the road took us right past our Bed & Breakfast for the night which was a beautiful home called The Old Schoolhouse.

We arrived a little early (seems we are always a little late or a little early) at 3: 30 so Peter, the husband, set us in the lounge with a pot of tea and homemade cake while he and his wife finished doing up the rooms.

Later, we had suggested that we were a little tired and may just go buy some food in town to bring back and eat in our room. I could see the look on Peter wasn’t receptive to that and he seemed embarrassed to say he’d rather we eat in the restaurant as they had had some “disasters” with people eating up in their rooms. Fair enough….so Gabriel and I hoofed it to The Buck House where we had dinner in another public house.

Tomorrow it’s off to Richmond and the largest town we encounter on the Coast to Coast.