Can the courtesy of our B & B hosts get any better? You certainly want to stay at the White Gill if you are on the Coast to Coast. Barbara is the perfect host and greatly reminded me of the “southern hospitality” I experience when I visit my wife’s family in Louisiana. The house itself had a homey feel and you almost felt like you were staying in a son or daughter’s room rather than a B & B. 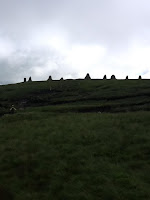 At breakfast we got to meet Simon, who stopped by to say hello. I forgot to mention we are using Packhorse for all of our accommodation arrangements, as well as for moving our luggage to the next location everyday. They have been fabulous and I couldn’t recommend them enough for all the service they have given.  Since they are based in Kirkby Stephen he stopped by to introduce himself and see how we were doing. He also gave me £7 that he said we had overpaid because of exchange rate or something.

Money going INTO my wallet on this trip…now that was a nice change.

I should say now that England is EXPENSIVE. The blow for us is cushioned a bit because Hong Kong is expensive but any Americans be warned, you’ll pay the same for an item in pounds in England as you would dollars in America; except pounds cost roughly 40% more. So if my lasagna dinner in a pub is £10 , the same dinner in the States is $10. Yeah, it hurts a little but I guess it helps pay for the National Health Service.

Well, we said our goodbyes and set off. 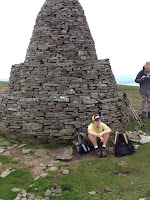 This short day begins with a 4 mile uphill journey over the Pennine Mountains. We took a few breathers along the way to stop and admire the RAF fighter jets buzzing overhead. Apparently, Her Majesty’s forces have been alerted to the fact that two American Allies are traversing the Coast to Coast and have kindly offered air support. “Jolly good show, ol’ boys.”

We passed the Motorway on an access bridge and two sheep had gotten out of the stile on the other side. We didn’t know what to do as we didn’t want to leave them. Then along came another couple doing the Coast to Coast. He obviously knew what to do and had Gabriel positioned at the gate as he grabbed the sheep by the scruff and herded them through the stile Gabriel was manning. They instantly became ‘The Shepherds’. 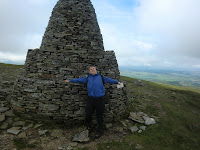 About 2 1/2 hours in we finally reached the top of the mountain line where the 9 Standards are. The 9 Standards are just a series of man made rock cairns all in a line at the top. Pretty cool, but no Mt. Rushmore. We grabbed a bite of food and a rest and ventured on.

This is where things got REALLY boggy. We were with a number of other hikers all trying to navigate and everyone of us got soaked up to our knees at some point. It was about this time I needed a toilet break. I strategically allowed everyone to move ahead spying a crevasse that would offer a little privacy in this mostly barren area. I only had to finally wait for one old couple who were struggling to make it through a particularly boggy area. They kept doubling back to find a dryer route as my ” dancing” got more frequent. They finally reached us and the man says to the woman, “Honey, this looks like a good place to stop for lunch.”

“NO,” I screamed in my mind….but alas, they started to settle in so Gabriel and I ran ahead and found another spot about 5 minutes later. This was something we laughed about.

We went through many more stiles and pastures finally arriving at the Keld Lodge just before 4 o’clock. The Keld Lodge is a hotel and pub and I found I enjoyed it when I only had to walk downstairs for dinner. We walk enough on this trip.

Well, tomorrow we are off to Reeth and another shorter day!