Gabriel was none too happy to hear that after the difficult day yesterday we needed to go 21 miles today. Thankfully, because we were out of the Lake District, things were a little easier.

First of all, all the rumors about Margaret at The Brookfield are true. She is gracious and thoughtful going the extra mile to make our stay special. Tea and cake were served to us in the drawing room, and the packed lunches she sent us with were so large we still haven’t eaten it all. She also did a load of laundry for us at no charge!

At breakfast, we were sad to say goodbye to The Navigators who became Chris & Elaine to us. Wonderful couple who had been with us since St. Bees but would only be going to Orton today putting them one day behind us the rest of the trip. Not only did we enjoy their company but Chris looked a little like C.S Lewis so I liked him immediately. 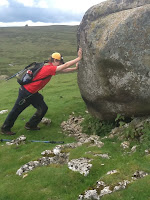 Although the mileage today was long – it was a much gentler walk. The difficulty we find was the “boggy ness” of many sections. I must say that nearly every local we have encountered, from passerby to publican to landlady, has said this has been the worst summer in decades and the worst year to do the Coast to Coast. Although we have actually been spared a lot of rain and have enjoyed mostly good weather the ground is saturated. Navigating water on the trail and trying to lessen the mud impact is constant. I know we are moving slower than other times people posted on their journals and am realizing that many of these areas we are walking through are usually dry…but not this year.

Kirby Stephen is a large town and the guidebook said that it had a Chinese takeaway place. Gabriel was motivated the whole day knowing that after 10 days of pub grub he would get some Chinese food. You can take the boy out of Hong Kong but you can’t take Hong Kong out of the boy.

About 4 o’clock we took our chocolate energy shots that act as a real “pick me up” on the long days. My wife got them for me before the trip; I don’t know what’s in them…and I don’t ask…but they work.

Gabriel also kindly turned his iTouch on and began playing Over the Hills and Far Away by Led Zepplin. Apparently he felt it was “time to get the Led out”. He then put it on an all British playlist that included:

That playlist got us through the frustration of the last boggy section entering Kirkby Stephen.

With wet and very tired feet we made it to the White Gill House where another lovely hostess, Barbara, helped us get our muddy gear off and into the drying room.

Gabriel and I did have the Chinese takeaway. The owner was from Hong Kong and was very happy to hear we were from Hong Kong as well. I think she really enjoyed chatting to some others from the territory…even if they were gweilos. I wish we could say we really enjoyed the food but my “Kung Pao ji ding” didn’t taste all that great. Gabriel had a similar opinion of his sweet and sour pork. I wonder if she eats her own food?

Tomorrow should be a little easier at 12 miles to Keld….but we’ll see.