A second day of lower mileage made for a shorter walking day. That was good, as breakfast wasn’t served until 8:30 AM – so an early morning st 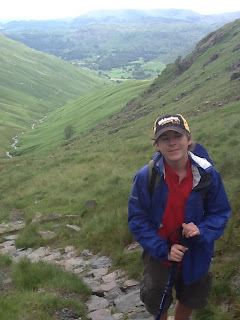 The Silver Lea was a very nice establishment and our room had a bath tub which Gabriel took full advantage of when we first arrived. In fact, he was so exhausted that he fell asleep in the bath…not the “drifting off” sleep you may usually get in the bath mind you, but the “out cold” version that comes from hiking across a country. When I woke him (out of concern) it took him a moment to gather where he was.

We had breakfast with the Two Ladies who were also at the Silver Lea that night, and then set off for a short day (9 miles) to Patterdale. Like our previous days, hiking through the Lake District today involves climbing out of one valley and descending into another.

We climbed up and out of the valley with beautiful waterfalls again being our constant companions. Every few minutes we would stop just to look at the stunning views of Grasmere receding below us.

One thing Gabriel and I have discovered is that when hiking this much, hunger, the need for energy, comes up on you fast and sudden. We stopped for lunch at the top of the ridge where we found a large rock to serve as a table while we ate with God’s creation all around us. I had picked up some groceries in Grasmere so my lunch was a chicken wrap (trying to wind down from the heavy meals) and Gabriel had a bar-b-q sandwich. 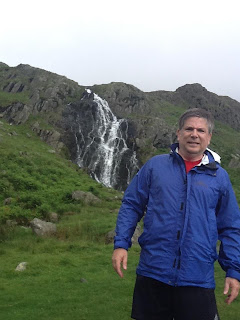 We met two interesting men today. The first chatted with us for about ten minutes and gave us information of the surrounding area. He said he used to like to walk the Lake District with his wife but she had passed away recently. When I said my condolences he replied, ” We had 50 good years together and now I keep her here (motioning to his heart) when I walk.”. We chatted for a few more minutes before wishing each other a pleasent journey. As we departed Gabriel said, ” People sure are nice in England.”

The second man, Tim, we met at the junction where we needed to decide to take the low (easier) road along the valley floor into Patterdale or to climb Helvellyn, for a breathtaking view into our destination. Tim was an older gentleman who said as we approached, “You must be the American father – son team doing the Coast to Coast”. Apparently word that the Yanks had invaded north England had gotten around.

Because of wind and low visibility, Tim discouraged us from hiking Helvellyn so we joined him walking through the valley into Patterdale. 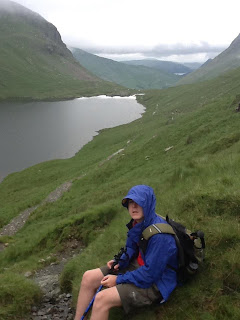 As the sun began to come out and visibility improved I half regretted not doing the climb but the other half was grateful of the wonderful conversation Gabriel and I had walking with Tim for the next two and a half hours. Tim had lost his wife 4 weeks ago and was in the area preparing to do the Camino de Santiago Pilgrimage in Spain in the fall. Because the Camino walk is something I am interested in, we had a wonderful talk about that and other topics, as we descended into Patterdale.

When we arrived Tim insisted on buying me a pint of his local favorite beer, Cumberland Ale, while getting Gabriel a lemonade. We sat outside on the lawn of the Patterdale Hotel drinking our beverages before saying our goodbyes.

That night we had dinner with The Two Ladies, The Speedys, and The Navigators. Enjoying some wine together in the dinning room of our B& B we all started saying what the high and the low point of today’s walk was. When it came to Gabriel, he said his high point was, ” meeting Tim because he was very interesting to talk to.”. It has been great as a father to see this trip becoming what I had hoped it would be. 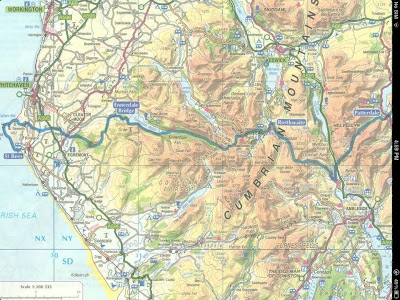 Well, tomorrow the short days end. We have a 16 mile slog over a couple mountains to the town of Shap –  so goodnight.