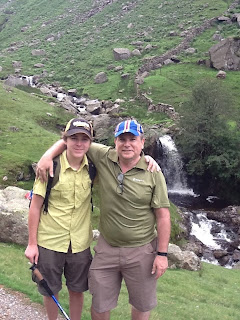 Shorter miles today did not translate into easier.

The Yew Creggs breakfast was at 7:30 which allowed for an earlier start time. Again we paid for one pack lunch to supplement our carried rations. In fact, because the breakfasts are so big, I took one of my pieces of toast and rolled a sausage in it for an on the road snack later in the day.

The walk begins pleasant enough with a nice walk through the woods, but then began the climb up and out of the valley. The climb, though, was actually quite fun with beautiful waterfalls being a constant companion through this stretch.

Although a bit tired, Gabriel seemed to enjoy this segment. I also need to mention the people we’ve been meeting on the way…  Reading other people’s journals I realize you do tend to give people nicknames based on some quality you observe. For instance there are:
The Two Ladies. The Navigators: husband and wife team who always seem to know the right direction to go.
The Speedys: husband and wife team who zoomed by us the first day (but who we have seen frequently since)
The Apostles: Father and son team who are named Paul and Mark 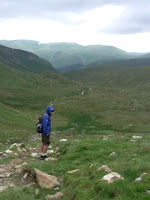 Well we reached Lining Crag which offered fantastic views but Gabriel was keen to move fast – which at first I didn’t quite understand. Turned out the rich breakfast was causing him to have need of a bathroom. His dilemma was that there was a backpacking group of older teens walking near us. There is nothing like the urgency and humor of a 14 year old trying to find a crag of secluded rocks on the top of a mountain to “relieve himself” that will offer him the privacy needed with girls possibly walking nearby.

We quick timed it ahead and Gabriel finally found the natural rock formation “toilet stall” he had been looking for. Ah, relief! 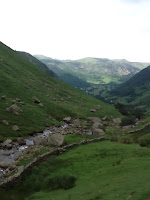 We reached a nice overlook point to spend 20 minutes to have lunch and take a break. The Apostles zoomed past us and gave greeting, which motivated us to begin our decent. Both of our walking sticks had broke and going down this mountain I realized for the first time the necessity of walking sticks when you do serious hiking. Both Gabriel and my legs took a vicious beating. It was steep, rocky and where there were no rocks… watery bog. 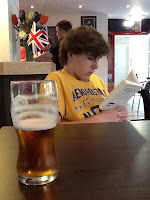 Grasmere was a welcome sight. A beautiful little village where the poet William Wordsworth lived and is buried. Once we found our B & B and had a rest, we set out to see this beautiful town. We purchased new walking sticks, bought a new book for Gabriel (Sherlock Holmes ) and then to a local pub for dinner and to watch Andrew Murray lose to Federer at Wimbledon. Some sad looking folk in the pubs this day. 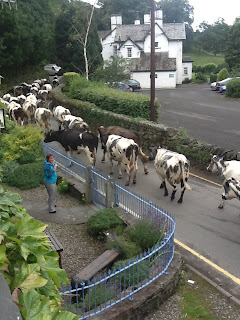 I finally got my curry (Chicken Tikka) and Gabriel had pizza.

In the evening, we heard the Two Ladies outside on the street. At the same moment a heard of cows was ambling down the way. We poked our heads out the window to greet our walking friends and admire the surreal sight of this heard of cows. I called down to the ladies to ask if they had got internet in our B & B. Before they could answer the man hearding the cows repled, “Sorry mate, we still use smoke signals in Grasmere.” We had a laugh about that at breakfast in the morning.

Then back into the room for and early night watching Ghostbusters.