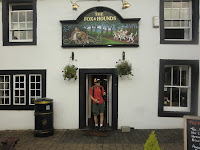 Gabriel loves the names of the places we have to arrive at every night. To journey all day through wood and over hill to reach “Borrowdale” sounds like something out of The Lord of the Rings”. Alas however, there has not been a Hobbit nor Elve to be seen…but still we hope. 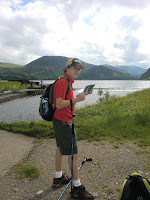 The Fox and Hounds pub in Ennerdale was a great first night on the road. My guidebook had stated that the place had not come to appreciate Coast to Coast walkers, but our experience was quite the contrary. Martin, who seemed to run the establishment, was gregarious and thoughtful. He sat down with us at breakfast and gave all the walkers an overview of the day’s route and what to look out for. And although we only ordered 1 lunch to go (trying to save money) he gave us some extra items for two. Thanks Martin! 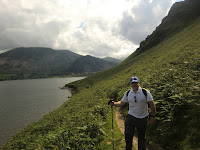 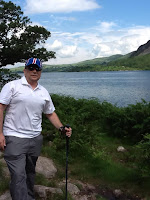 We set out at 9:30 AM and the start of the walk is around Ennerdale Water. We took the south route and the scenery was to die for. Gabriel and I kept stopping just to pause and “take it all in”. There was a scary part at one point climbing through some rocky area where a step to the left would mean a long way down to death or very serious injury. Fortunately it was only a few steps but as Gabriel aptly put it, ” You wouldn’t want to come through here if you’d been drinking.”

We arrived at the Black Sail Youth hostel at 2:00 PM…a little later than I had planned. The Black Sail is the most remote youth hostel in England and is essentially a shack in the middle of nowhere. It is deserted during the day but offers tea and cake in the kitchen where you place money in a jar on the honor system. We stopped here for about half an hour to eat some snacks, sit on the outside bench, and admire the stunning views of surrounding mountains. Gabriel even got to play a little guitar as one was just inside the lodge.

Rested, we now prepared for the long climb up Loft Beck to Honnister Pass. We paused a couple times to catch a breather and throw rocks down at targets we picked out. I was far better than my son and apologized to him for failing to play baseball with him more often.

The views at the top of Loft Beck are stunning and you feel a real sense of accomplishment when you reach the top. From there you follow a series of cairns past an old quarry mine and then backdown the other side into Borrowdale Valley. It was at this point we caught up with a number of other walkers were had become acquainted with and we all ended up arriving at the Yew Creggs B & B at the same time -which kept our gracious lady on her toes.

Oh, forgot to mention the weather today was perfect. Tomorrow should be a shorter day of 9 miles to Grasmere where, hopefully, we can get some laundry done.