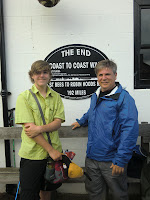 Last Day!  After two weeks on the road the excitement has really started to build that the end of our journey is nearly complete.  There is something very different in a hike that takes multiple days and weeks rather than an afternoon.  A feeling of victory, accomplishment, overcoming…etc.  But wait, I am getting ahead of myself…as they say, “we ain’t done yet!”

Woke up in Lisvane bed and breakfast which was another gorgeous home.  I must admit the owner at first did not win me over.  Not that she was rude mind you, just matter of fact in a way that made us feel a little unwelcome when we arrived.  Then I found out that I had to pay 2 pounds for the wi-fi password which made me slightly annoyed as we hadn’t had to pay at any other place the last two weeks.

As with many situations in life though, there is always another side to the story.

In the morning at breakfast our landlady’s demeanor had changed and she was very gracious and talkative (maybe something else on her mind last night?).  She explained that she charges for the wi-fi (without my inquiring why) as a donation to the volunteer mountain rescue teams that help stranded hikers.  (Any irritation I had with paying 2 pounds instantly disappeared).  She mentioned that since the BBC documentary on the Coast to Coast with Julia Bradbury had come out in 2009 there had been a spike in the number of hikers needing the services of rescue teams as people watching Julia jogging along the trail were under the impression it was easy…and its NOT!  (Rumor has it that Julia didn’t even do the walk).

Anyhow we bid farewell but I do have to mention that you know you are in a small town when the barmaid who brought our dinner to us in the pub the night before is the same girl who came in the morning to deliver Gabriel and I our full English breakfast.

The hike out of Grosmont is a somewhat steep climb and Gabriel’s blister was bothering him so we moved slowly.  We had now become accustomed to his foot needing a while to work itself in.  As luck would have it though we took the wrong road out of the town (looked pretty confusing on the map I must say).  Realizing we were heading in the wrong direction and yet trying to avoid backtracking down to the starting point again I looked around for a local I could ask directions from.

I don’t think I have mentioned how much I have enjoyed doing this walk in an English speaking country.  The ability to ask a local person directions without crude attempts at a foreign language, speaking in baby talk English, or resorting to charades and hand signals was a welcome advantage.  Finally an older man tending his garden saw me with my map in my hand and said, “you look like a lost Coast to Coaster”.  He went on to tell me that the intersection near us would put us back on track with minimum backtracking…a welcome relief.

We left Grosmont behind us and entered Little Beck wood which allowed for about an hour’s walk through possibly the nicest, and most enchanting, woods on the route.  It really felt “Middle-Earthy” and we enjoyed the time there save the mud in areas.  At Falling Floss Falls there was a nice little cafe near the waterfall where Gabriel and I had a quick sit down lunch so as not to “rush through” our last day.  We bought some preserves to take home to Tammy and shared a big slice of carrot cake together…when I say share I mean about 3/4 for me and 1/4 for Gabriel

Afterwards we hiked off into the woods and ended up on the wrong side of the river.  Gabriel did and “Indiana Jones” by climbing across on a fallen tree while I continued down another 1/8 of a mile until I found a number of rocks that would allow me to get over.  (Only got one boot wet).

We emerged from the woods for one last march across the moors (I really thought we were done).  Anybody who thinks this last day is just and easy end to the C2C has another thought coming.  The moor areas were darn near close to swamp and as we got closer to the sea in the distance the ability to stay dry became impossible.  We finally gave up and for about 2 miles we alternated between dry grass trail and being up to our calve in water.  Oh, well! 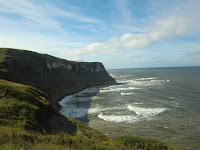 At one point we missed a marker in the midst of a marshy area and we even knew we could get lost as the map said, “Careful, its easy to get lost in here”.  There have been a number of times where a compass came in handy on this trip to get our bearings…and this was one of them.  We managed to get on some kind of path but realized it was heading us the wrong way again.  I didn’t even need a compass here as I could see the North Sea and knew we were heading towards Whitby and away from Robin Hood’s Bay.

I started getting really frustrated but it was Gabriel who kept the peace wanting to know why I was getting so mad when we should just enjoy the situation.  I told him I didn’t mind getting wet and muddy walking in the right direction…but in the wrong direction?  Fortunately, as what often happened when we got lost…it wasn’t as bad as we first thought (a good life lesson here).  The negligible path we were on finally merged with a cement path that had a Robin Hood’s Bay directional sign on it.  About 10 minutes later we were back where we were supposed to be and FINALLY reaching the sea!

Old Wainwright though, he doesn’t let you finish here, oh no!  Like the beginning along the Irish Sea 2 weeks and 200 miles back, he wants you to see the coast for a while before dipping your boot into the water for a finish.  And the wait  is well worth it.  Beautiful cliffs, ocean breezes, and gawking seagulls are part of your last hour or so on the Coast to Coast. Our necks kept straining around every bend to see if we could finally see Robin Hood’s Bay…until around one particular bend…there it was.  Just a quaint little fishing village…but it was our destination.

We entered into the top of the town and walked past our bed & breakfast for the night.  We decided to pop in and let our host know we had arrived before heading down to the bay for our ceremonial finish.  Jane, the owner of The Villa, kindly offered to walk down with us to film the big moment.

Like many others before us, we were getting ready to end our big adventure.  As you walk past tourists and locals alike you want to almost scream out, “You know what we’ve done?  We’ve just walked 2 weeks and across a country to be here today!!”  Gabriel and I reached the water whose tide, which unlike St. Bees 2 weeks earlier, was in.  We we let the water wash up on our boots, Gabriel threw his rock (I kept mine and turns out he had 2 and kept one as well) and we hugged.

Mission accomplished!  A dream 16 years in the making was realized.

Our fellow walkers from Germany were also on hand having finished about 30 minutes before us.  We agreed to meet back at Wainwrights bar for a celebration dinner and a toast to having accomplished the Coast to Coast walk!