Ah, The Lion Inn!!  What could make for better atmosphere than spending a night in a 500 year old inn, isolated, located high up on the English moors on a foggy windy night?

Not much I guess. 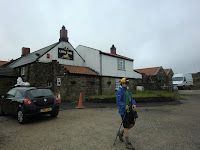 I even woke up in the night because the window I had left open was now banging in the wind. I looked out into the foggy distance as I closed it and thought this is exactly the moment where the werewolves would attack in the movies…but not tonight.

We woke for breakfast which as usual was quite good. I even tried “kippers” for the first time which I mostly enjoyed. We packed up and said good bye to our Aussie friends as they would only be going as far as Glaisdale today…and waved to the Germans who we know we would see in Grosmont later.

When we left the fog had mostly lifted but the wind was harsh. The first hour of the day involves walking in a horseshoe pattern along the top of a moor. Ironically this meant after 45 minutes of walking we were closer to The Lion Inn than we were after 20.

It was hard to talk and Gabriel’s blister was hurting so we walked slowly in silence as the wind howled.

We did come to “Fat Betty” which is a large stone cross on the side of the road where tradition has it you are supposed to take a snack…and leave a snack. Unfortunately due to the heavy rain there was a moat of water and mud around old’ Betty. There was a Snickers bar sitting up there but Gabriel and I chose to just get a picture and move on.

Gabriel and I kept commenting that “tomorrow is our last day”. I think it is a bittersweet feeling. We’re looking forward to finishing and getting home to Tammy and Ethan George, but we’ll miss the adventure and challenges of the trail.  We finally descended off the moors in to the green valleys again coming to the village of Glaisdale. Because we had spent a bit more money than usual at the Lion Inn we wanted to scale it down for lunch today. We thought to just get a couple of sandwiches from the village shop but that was closed for lunch. (ah, small towns). But the village butcher was open next door and we got perhaps the best deal we’ve had since we started our adventure. Fresh meat pies stock full of beef and chicken for only £1.10 a piece. We each had one and split a third.

Coming up to the town of Egton Bridge we stopped by the St. Hedda’s church which is a beautiful catholic church and surprisingly is quite grand and ornate for such a small village. Certainly worth a look if you get the chance… The guidebook said that in 1679 Nicholas Postgate, the priest at the time, was hung, drawn and quartered for continuing to practice his faith. How can someone be sentenced to such a torturous death simply because they worship God in a slightly different way? Madness!!!

We finally arrived in the afternoon at the Lisvane Bed & Breakfast which is another beautiful home in a very picturesque town. We had a bit of a rest before heading down to the North Yorkshire Railway Station to look at all the train locomotives. What is it with trains and guys? The locomotives here were used in the first Harry Potter movie as The Hogwarts Express.

After a walk around the train yard we headed over to the appropriately named pub called The Station for dinner where we were joined by our German friends who were already there playing darts. We shared a meal together before saying good night and agreeing to meet tomorrow evening in Wainwright’s bar for a celebratory beer after finishing the walk.

We headed back up the road and prepared for The End…Robin Hood’s Bay…15.5 Miles away!