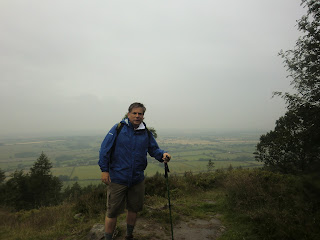 When we rolled into Park House last night we could hardly walk.  Everything hurt.  I long distance walking friend of mine had told me before this trip that when he keeps a daily walk over long distances at 18 – 20 miles, blisters and body do well.  It’s after that 20 mile number that the body starts to really feel it. 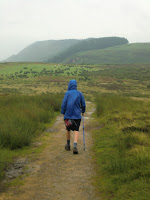 I can say that is pretty true.  I was in good shape up to about 20 miles…then I started to get tired.  Going upstairs to my room at the Park House I had to grab on to the rail as I was SO sore.  Also, I had misread the guide that had said the Park House provided food.  Gabriel had wanted to eat in Ingleby Cross but as it was already after 8:00 PM I assumed that Beverly, our landlady, would be wondering where we were.  Sure enough, she had hopped on her 4 wheeler and had come looking for us just as we approached.  Apparently, they provide a dinner with 24 hours notice but seeing our condition she took pity on us and in no time we had homemade bread sandwiches and steaming bowls of soup in front of us. 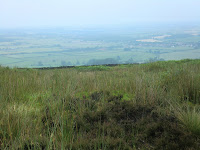 The next day we prepared for our much shorter journey of 12 miles to Clay Bank Top.  After a pleasant journey (all uphill mind you) through a beautiful stretch of woods, you suddenly break out into the open fields and begin the first day of traveling across the moors of England.

Although it was a shorter day there was a lot of elevation change…which essentially meant you went up atop one moor, walked across, and came down the other side only to then repeat the process again.  There were some beautiful views up there though despite the wind.

At one point Gabriel was a distance ahead of me coming down a steep section…as he tended to do on steep sections.  I slipped on a wet rock and slammed shin first into and exposed rock cropping.  In 14 days of walking of the entire trip THIS was the most painful moment.  I yelled out across the moors and then yelled for Gabriel.  My son is something alright.  Being 14 he likes to be a little smart alecky with me but whenever I stumbled or twisted my foot etc. he was quick to be a genuinely concerned son with a “Papa, are you alright”

Now, when I really needed him, he seemed to ignore my calls and continue to prance down the hillside.

I had to sit down for a couple minutes and then walk in circles a bit to “walk it off”.  Finally, the pained subsided and I continued down to where Gabriel was meeting me by a stile.  I gave him a bit of an earful and he apologized not realizing I was really hurt.  (I’m writing this entry 10 days after the incident and that shin is still bruised and sore)

We met up with our new Aussie friends who I forgot to mention had spent the evening at Park House the night before with us.  The nephew, Rob, was making a tuna fajita in the field for lunch.  We chatted a bit and then made our way.  We would connect with them the following evening when we reached The Lion Inn.

When we reached Clay Bank Top there is actually nothing there except a parking lot.  The Buck Inn where we were staying was almost 3 miles away and we were expected to call them when we arrived and they would come fetch us and then deliver us back to the same point in the morning to continue.  Gabriel and I were a little disappointed as we had gone 11 days now using no other transportation other than our own feet.  We were kind of hoping we’d go the whole time without riding in a car but the choice was an extra 3 miles there and back…so we opted for the car.

Thankfully as we didn’t have a phone some fellow walkers lent us their cell and about 10 minutes later we were picked up by the proprietor of The Buck Inn, Wolfgang.  Wolfgang had a strong German accent but said he was from Australia.  Almost automatically he explained he had been born in Germany but lived in Oz for 28 years becoming and Australian citizen.  I appreciated that as through the whole trip people asked where we were from, or the more perceptive asked, “So what part of the States are you from?”  Of course when we said we were from Hong Kong we got that quizzical look  So we started introducing ourselves as “Americans from Hong Kong”…and then the explanation. 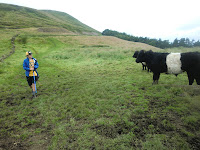 After we checked into our room I came down to the bar area and one man was sitting there (it was still early) sipping a pint of ale and tapping on his laptop.  He said hello to me with an air of familiarity.  As I struggled to place him, he said, “I’m John.  You ran into my wife and I a few days ago when we got those sheep through the stile near the motorway.”

Ah, The Shepherds.  I hadn’t recognized him without his hat.  We chatted for a bit and I learned he was a business professional who had never dealt with sheep in his life…he just did what needed to be done.  Good guy…as were just about everyone on this walk tended to be.

Gabriel and I had dinner a little later and then got to sleep early excited that tomorrow’s walk to Blakey Ridge would be the shortest walk of the whole trip, which after the last two day’s walk we were sure looking forward to.