I woke to another very cloudy, rainy day. Although, today’s walk was only 10 miles, I wanted to get an early start so that I could take my time and yet still be in Richmond early enough to stock up on supplies and do a bit of washing of clothes.

I was first down to breakfast. The landlady, Sandra, had welcomed me last night, but it was Les, her husband, who was in charge this morning. Mick and Sandra, who had stayed here before had forewarned me that Les was a down-to- earth Yorkshireman, who said things as they were.

When the two Canadians came down for breakfast I’m not sure that they quite knew what to make of him. He asked them what kind of cooked breakfast they wanted, and they were dithering a little, so he said to them, “Tell ya what, I’ll go and do a couple of little chores in the kitchen, while you decide”‘. The Canadian husband replied “OK, no hurry, there’s plenty of time”, to which Les replied, half under his breath “Not for the cook, there ain’t”. Les was full of quick repartee like that. A really nice and funny guy, once you got used to him.

I set off just after 8.30am, and for the first five minutes or so the pain was really bad, but as my muscles warmed up, the pain wore off and I found walking normally and at a reasonable speed not too difficult.

I am sorry I don’t have so many photos for you today, but the rain was heavier and so I stopped to take photos less than usual.

I left Reeth, following the Swale and crossing fields and soon came to Grinton Bridge. 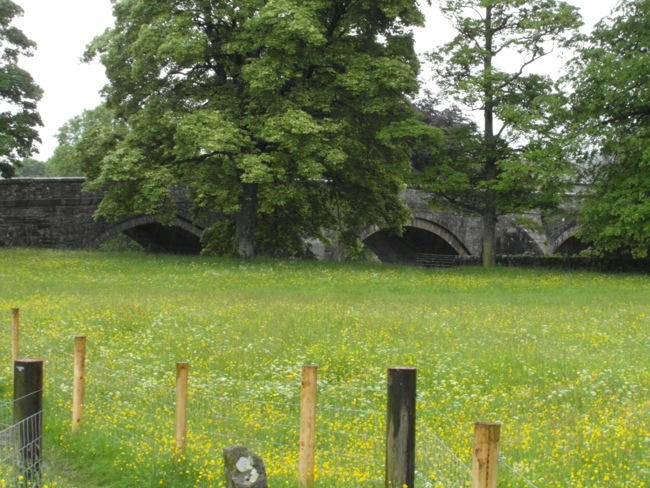 Once on the other side of the bridge I could see that the river was running high, because of all the rain, some of which managed to get on my camera lense. 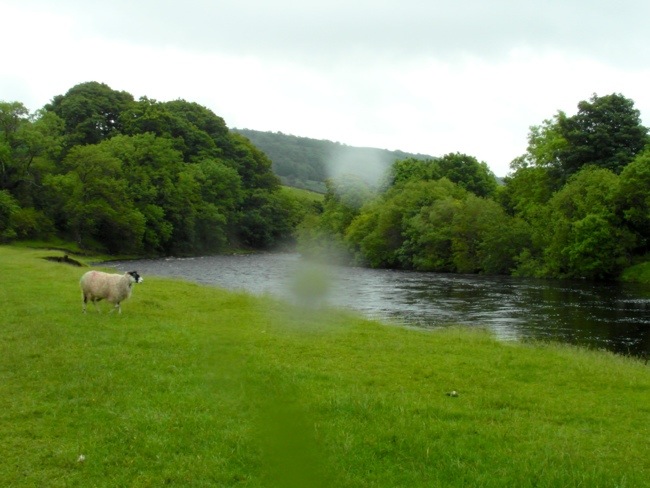 I left the river and headed along a road that brought me to Marrick Priory, founded for Benedictine nuns in 1154 and dissolved by Henry VIII in 1540. It is now an outdoor activities centre. 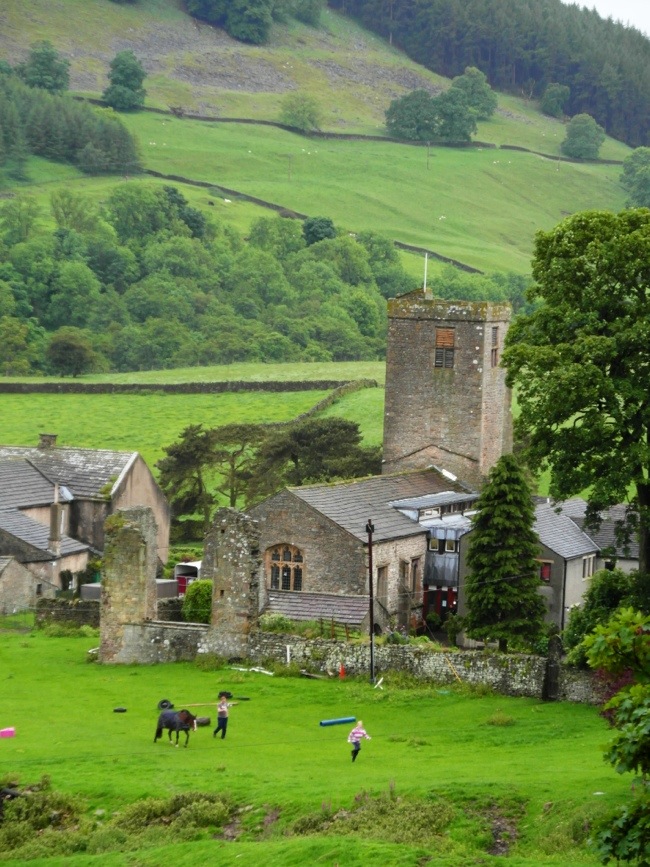 This calf in a nearby field didn’t look very old. It’s mother was certainly being protective. Fortunately, I didn’t have to pass through its field. 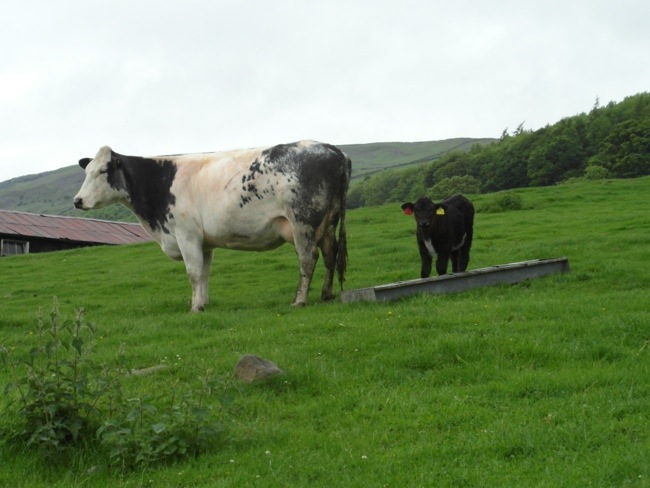 Shortly after leaving the priory behind I climbed the Nuns’s Causey (or causeway), 375 paved steps that lead up through Step Wood towards Marrick hamlet. The steps were quite slippery after all the rain, and about halfway up turned into a stream rather than a path. 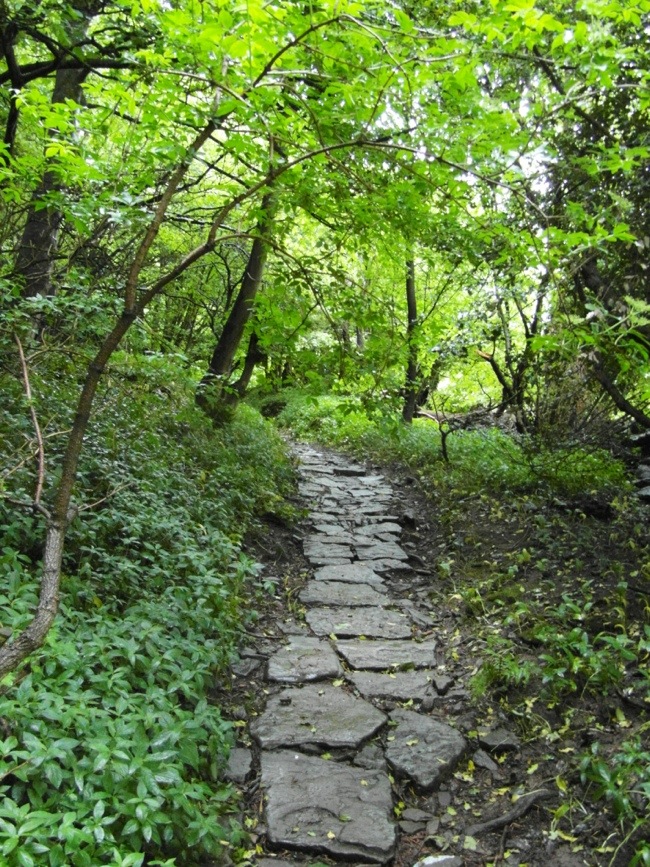 The view out over the fields from the top of the Nuns’ Causey. 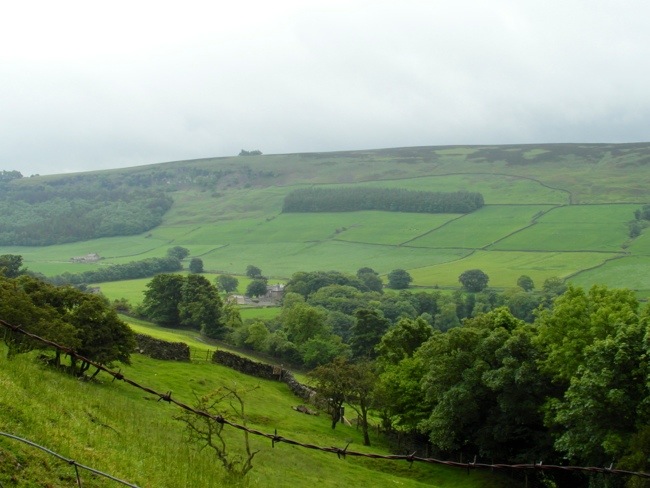 Shorlty after this, as I walked along the edge of a field next to a dry stone wall, a hare jumped right up onto the wall just in front of me. When it saw me it jumped back down. I stood perfectly still, and a few moments later, probably thinking I had gone, it jumped up again. On seeing me still standing there it decided to go another way, but I just managed to get a quick photo as it hopped across the field. 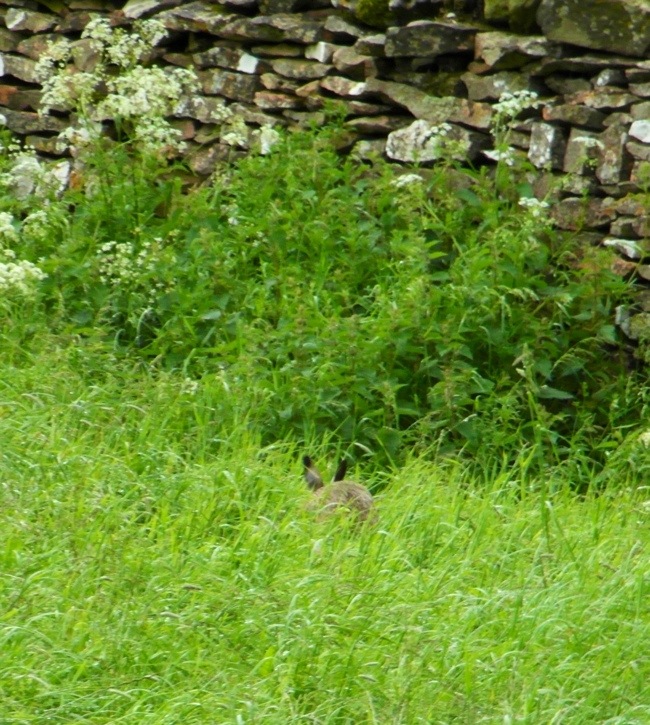 After passing through Marrick, there were some open fields to cross on the way to Marske. The views were quite good despite the rain. 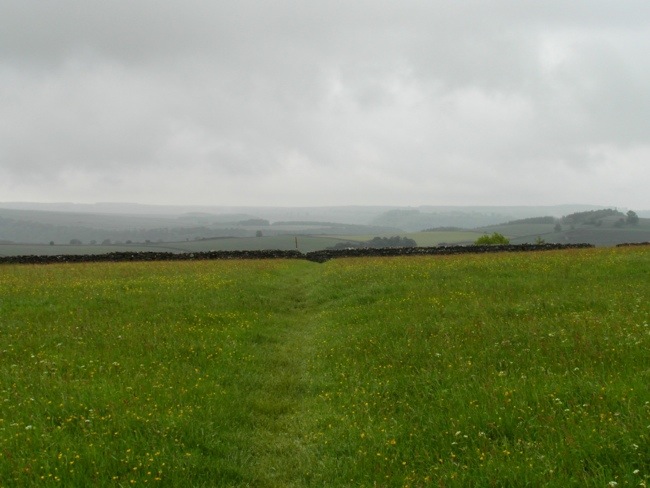 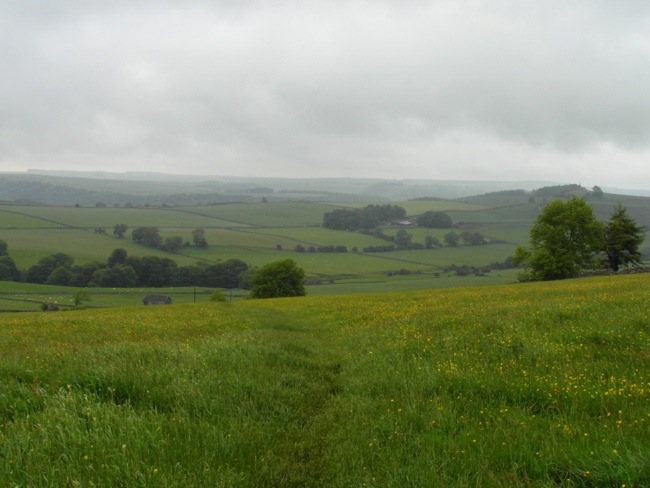 There followed some tedious road walking into Marske and then on the other side across some more fields I could see the small hill in the centre of the photo which I had to climb halfway up. 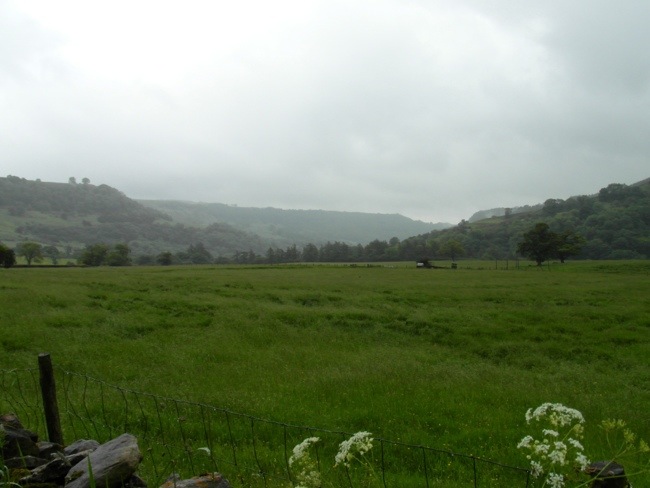 The view from the top of the hill, back to where I had just come. It was a very muddy and slippery little path up. 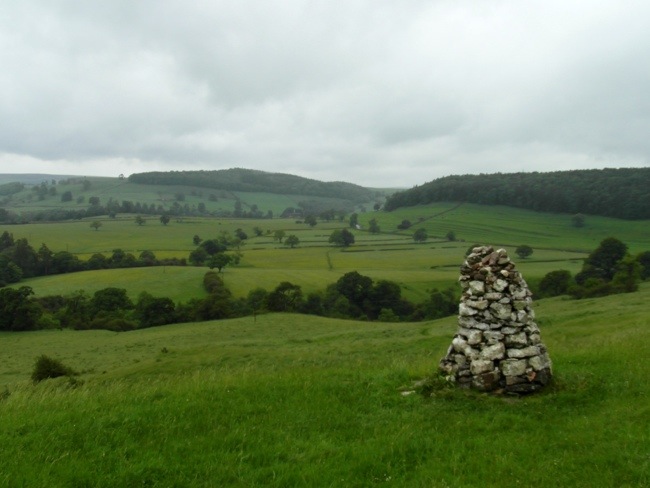 Now, those of you who are my parishioners at Kensal New Town, will know that there is more than one Kensal. There is our own Kensal New Town, but also Kensal Rise (with which we are often confused) and, of course, Kensal Green, where the famous cemetery is. Well today, I passed through a place even more open to confusion. It was a series of farms along the bottom of the limestone escarpment I had just partly climbed, all called Applegarth. There was West Applegarth, Low Applegarth, High Applegarth and East Applegarth. While passing all these farms, I saw one of the farmer working his dogs to move the sheep in, presumably for shearing. One of the Applegarths. Which one, you ask? Take you pick, ‘cos I don’t have a clue. 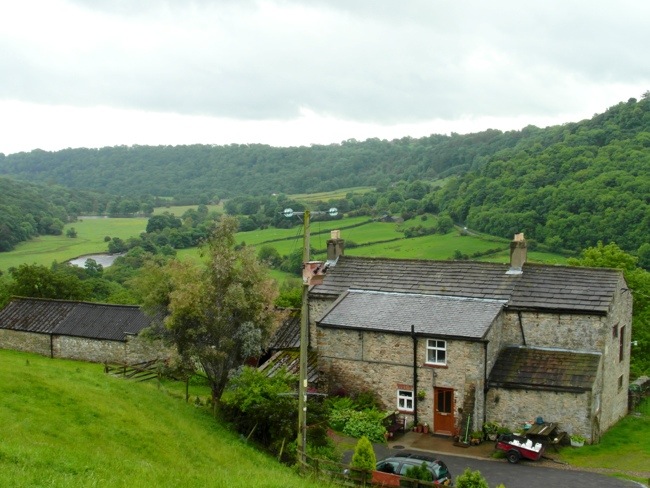 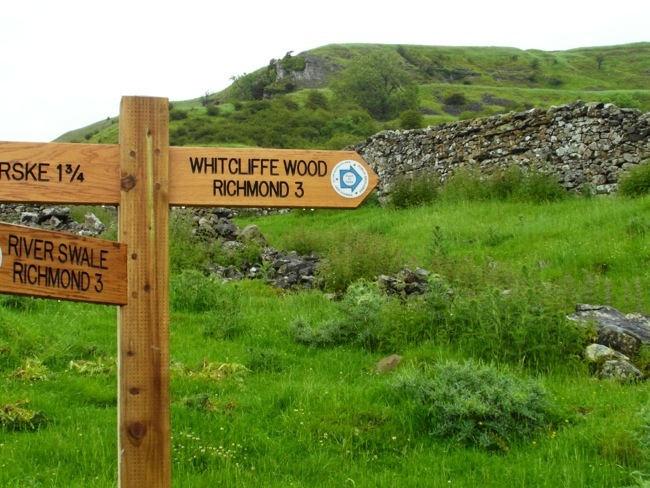 As the previous sign said, the next stage of the walk was through Whitecliffe Woods. This would have been lovely in better weather, but the rain had turned the path into a muddy quagmire. I wished for wellington boots here rather than walking boots. 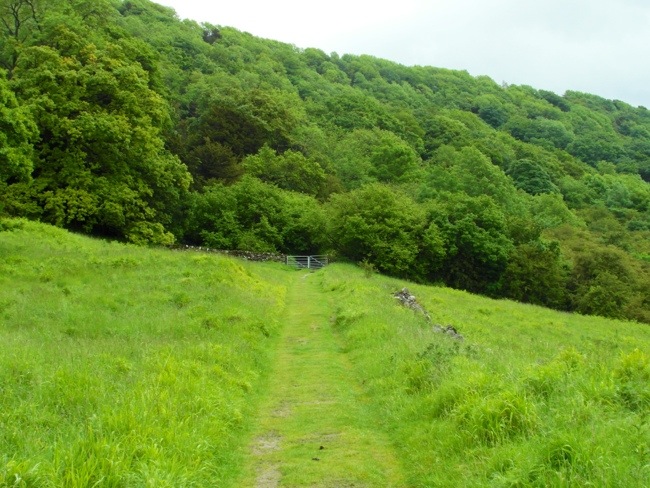 This sign was deceptive, there was still a fair trudge down to the town. I made the mistake of taking the footpath, guess what…more mud! I should have stayed on the road. 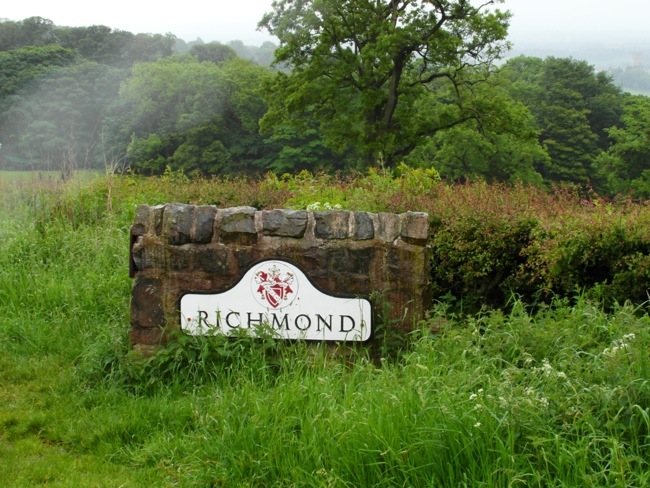 Soon the lovely Yorkshire town of Richmond (not to be confused with Richmond, Surrey – I would be a long way off course, if I was there) came into view, which its impressive castle dominating the skyline. 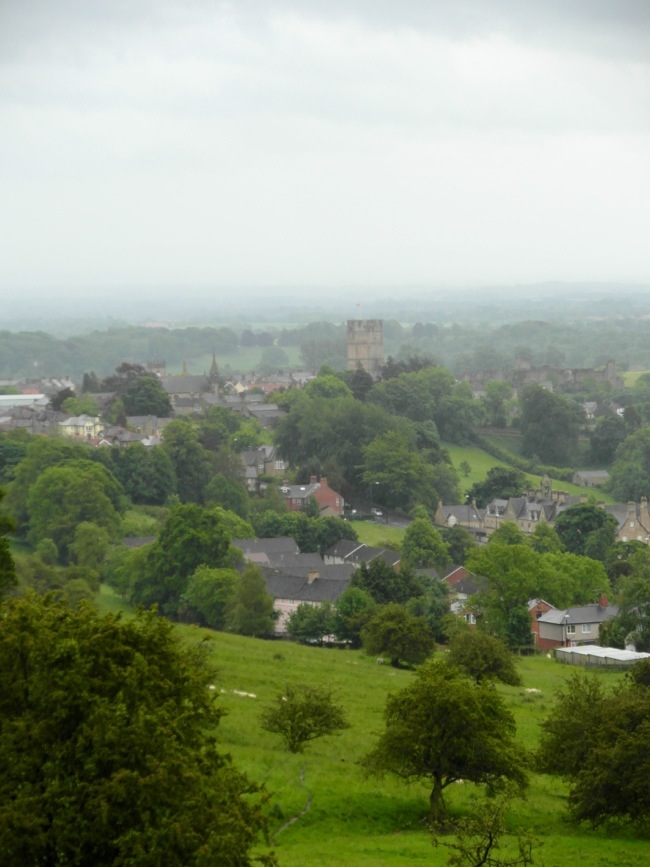 I hope to get some better pictures of the castle as I leave Richmond tomorrow. 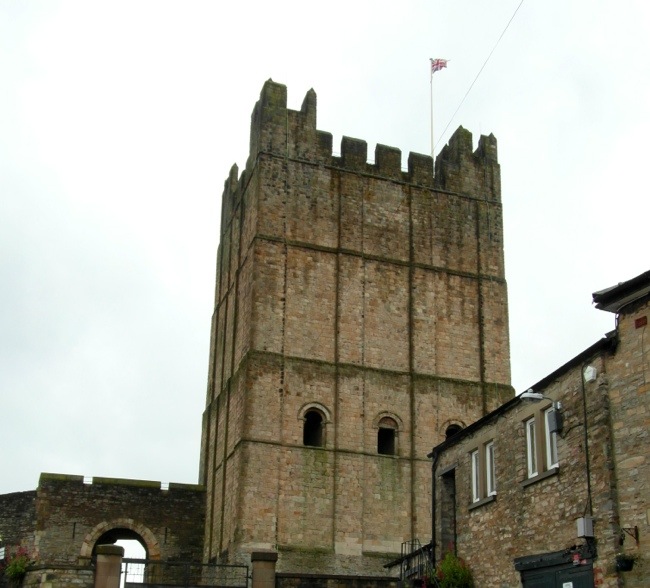 It was just passed 1pm. I had made good time. But as I couldn’t check in to my B&B until after 2pm, I decided to go and get something to eat and drink in the little cafe in the covered market in the centre of Richmond. And who was sitting there but Pam and Dave, whom I hadn’t seen since I walked into Kirkby Stephen with them several days before. We spent a pleasant half an hour catching up on our respective adventures.

It was then off to find my B&B. I wanted to get checked in asap, as there were a few things I needed to do while in Richmond. It was a beautiful and historic house near the centre of the town. The landlady was especially welcoming and helpful. I asked her where the nearest laundrette was, as I was running out of clean walking clothes. She told me that Richmond didn’t have a laundrette and the nearest one was in Catterick, 3 miles away. I was very relieved when she said that she did a laundry service and would be happy to do a wash for me. I next asked where the nearest Catholic Church was, as I needed to attendthe vigil Mass tonight. There won’t be time tomorrow, for reasons you will see in a moment. After a refreshing hot shower, I went out to buy some more Compeed blister plasters (I am certainly getting through them) and supplies for tomorrow. Why all these preparations, you ask? Well, because tomorrow is the longest day of walking, at 23 miles. 23 miles of mostly flat farmland through the Vale of Mowbray, much of it on roads. This is bound to be a testing day in many ways. An early night tonight, I think!