Let me begin by apologising for not blogging yesterday. I had thought that Grasmere would be one place where I could be sure of a good WiFi connection, as I was to be staying at the Red Lion, quite a prestigious hotel in the centre of the village. They did indeed have WiFi, but it was impossible to connect to it from an iPad. I queried it, but all they had was some feeble excuse that the Ipad firewalls caused a problem. Well, I thought to myself, I haven’ t had this problem anywhere else enroute. I was not a happy bunny…as you can probably tell. So now, I will do two blogs this evening, as a result they may be a bit shorter. Not being a regular blogger up to this point, and having to get used to blogging from an iPad, it is quite a slow process.

Anyway, on to the the events of Day Three. Being a Sunday, I began the day with an early celebration of Mass before breakfast. That reminds me of something I meant to tell you on Day One, but which I forgot to include. On the night before I left London, the Missionaries of Charity (The Mother Teresa nuns, if you don’t know them) posted a letter through the Presbytery door, with the clear instruction “Not to be opened until Day One of your walk”. When I opened it on the first morning before setting off from St Bees, I found inside a beautiful little handmade booklet, in which the Sisters said that they would like to spiritually sponsor me with a little spiritual reflection for each day of walk. Each little reflection is accompanied by a lovely picture. I have been reading the little reflection each morning and it has been lovely to reflect on it during each day’s walk.

At breakfast there was a group of Australians also doing the walk, but none of whom I had met along the way. They were making a more leisurely itinerary, stopping for a few days in Grasmere, so I don’t think our paths will be likely to cross again.

The walk began with a pleasant stretch along Stonethwaite Beck. As I approached the beginning of the walk I saw a couple of guys, who had been at breakfast on the first morning in St Bees. We exchanged waves, as I was a little way behind. I didn’t see them again, but later found out that they were not stopping in Grasmere, but pressing on to Patterdale (doing in one day, what I am doing in two). This is perfectly feasible as both days are short mileages, but this is the most beautiful section of the walk and deserves taking time over.

The path runs to the left of Stonethwaite Beck through the trees. 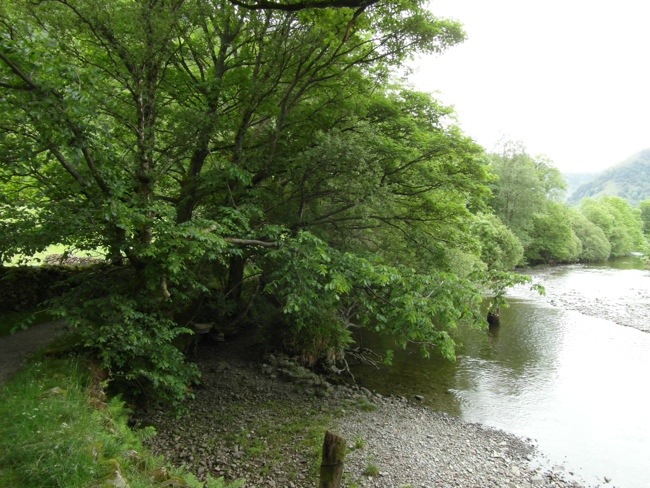 The Lake District is famous for its dry stone walls. I admired this beautiful stone sheepfold.

My path headed up the valley headed. A little further up, I stopped for a breather and looking back down the path, I saw a walker heading up the path. I thought I recognised him, and indeed, it turned out to be Manhattan Pete. We caught up with each others’ experiences and walked on together. As we headed up the valley we were now following a different watercourse – Greenup Gill. It had many beautiful waterfalls. 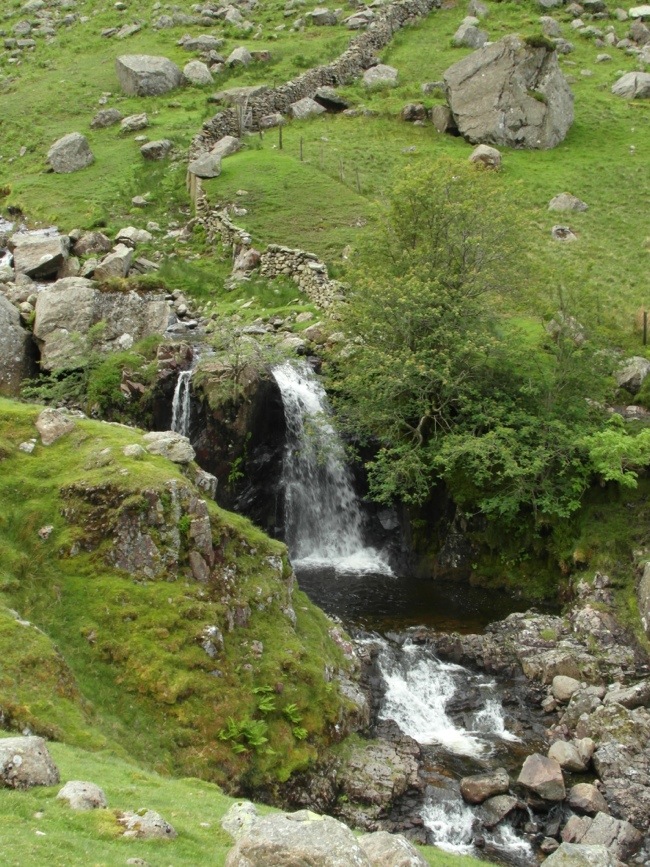 As we had back at the start of the walk at St Bees, Pete and I took each others’ photo. 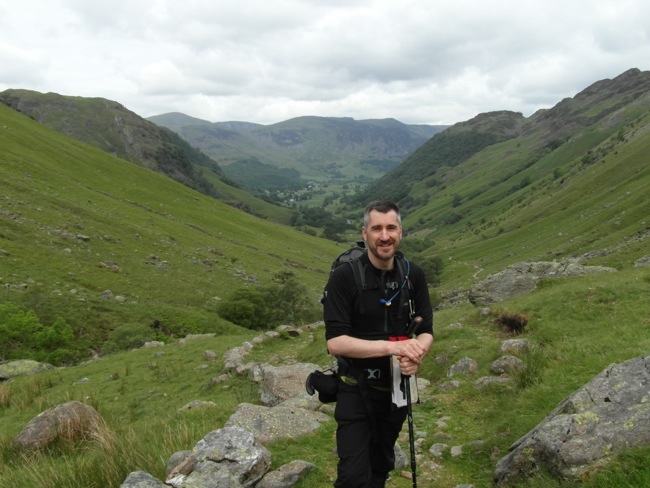 As we headed on this beautiful view opened up before us. 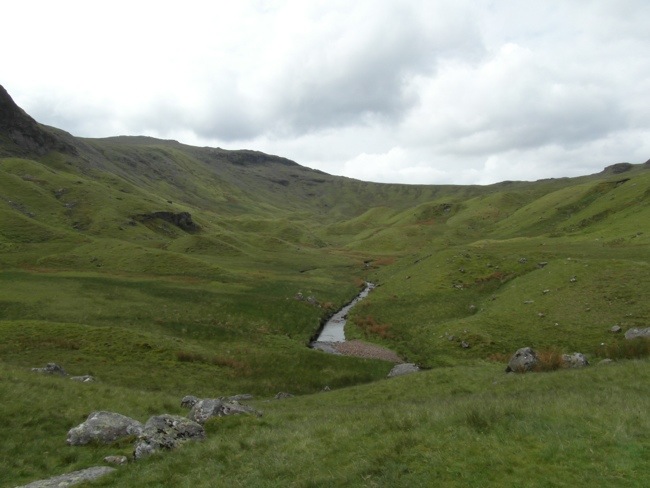 But our path would take us to the left of the formidable buttress of Lining Crag. We could see that someone had already made it to the top and was admiring the view. 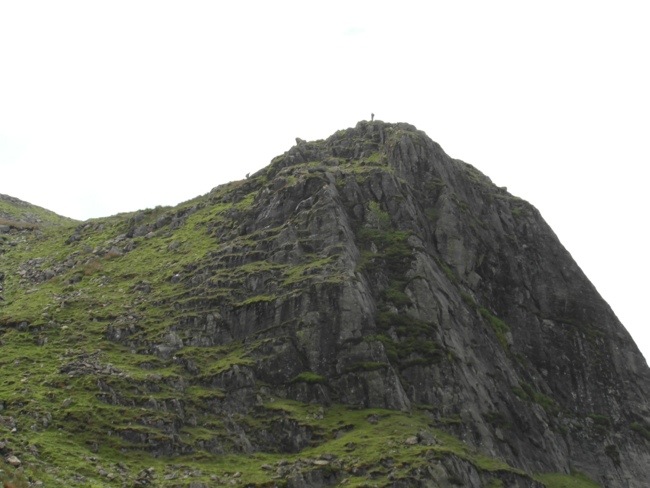 We began the steep climb. 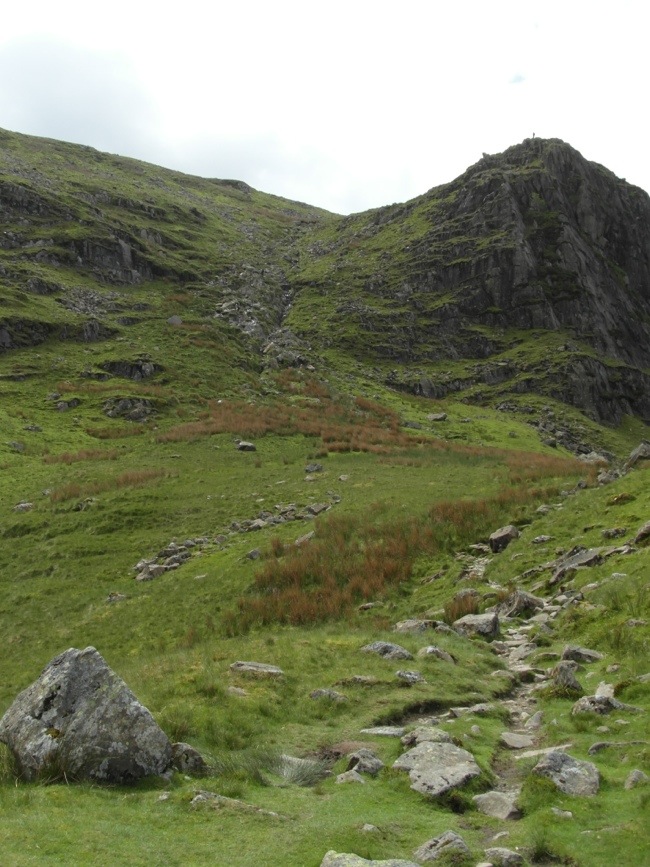 As we approached the top of Lining Crag we could see that there was a quite a gathering of walkers there. As we got nearer we realised that it was the Lancashire Three and another couple I hadn’t yet met, called Dave and Pam.

In the photo below, you can see them all. John (one of the Lancashire Three) is offering Manhattan Pete (and the rest of us) a piece of Kendal Mint Cake. 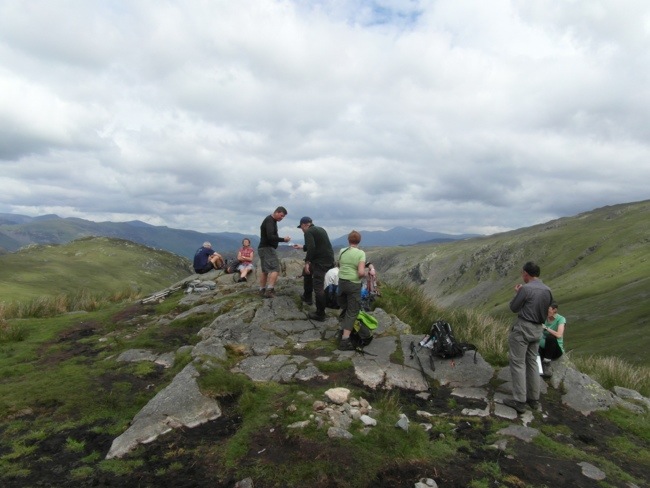 There were some great views from here. The large fell in the far distance to the right of centre, just out of cloud, is Skiddaw, fourth highest of the Lakeland Fells. I happened to know that a walking friend of mine, Paul, was there today with a group of friends. So near..and yet so far. The lake that you can see in the distance is Bassenthwaite Lake. Incidentally, the only lake in the Lake District that actually has “Lake” in its title. We all carried on together towards our next objective, Greenup Edge, from where we could see the next pass opening up before us. Here a big decision would have to be made. 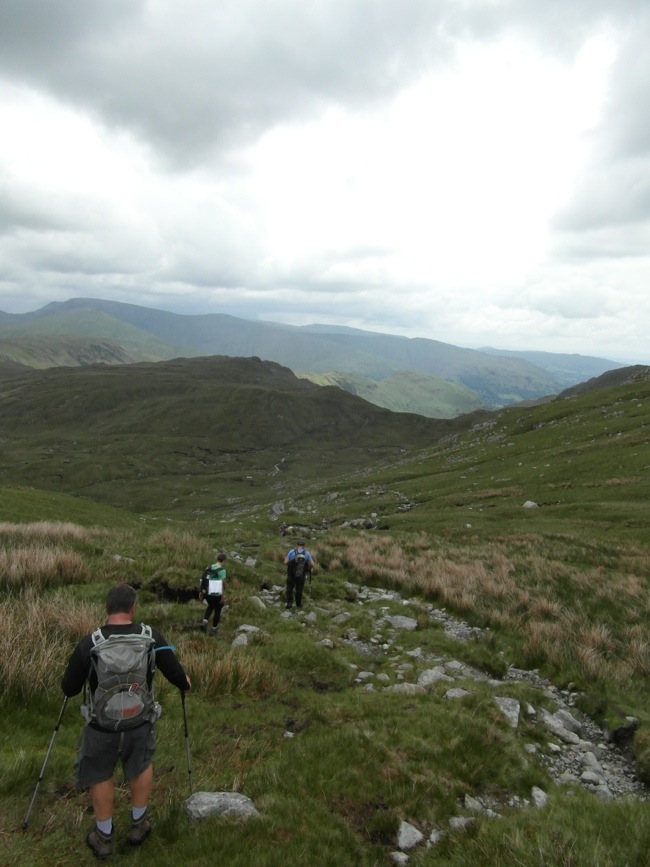 At this point it is possible to choose between two routes. Either to descent to Grasmere via Far Easedale, or to take the high route via the Calf Crag – Helm Crag ridge. Here there was a parting of the ways. The Lancashire Three and Dave and Barbara decided to head down Far Easedale, while Pete and I decided to do the high route.

You can see the high route to the left of the photo. The first summit to be reached is Calf Crag. 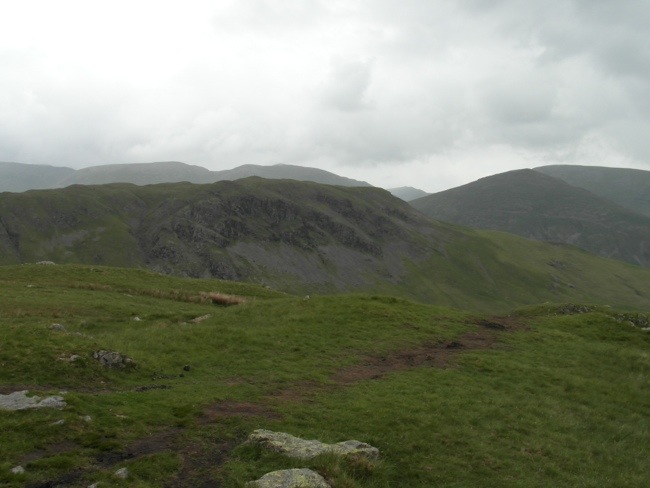 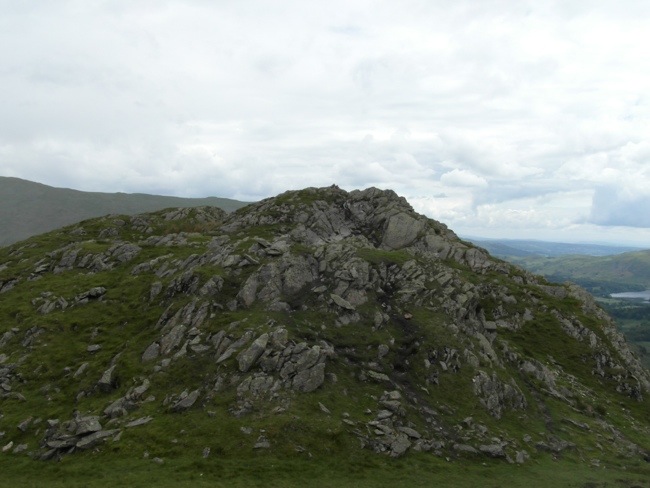 Then it was on to Gibson Knott, and finally the famous Helm Crag, known often as ‘The Lion and the Lamb’ from the way that a rock formation looks like these two animals from the road that passes by Grasmere.

I was taking my time. As you can see, the weather was improving. Pete decided to press on. That’s very much the way it is on this walk, noone feels under any pressure to walk with anyone for the whole day. People either hang back or press on as the mood takes them.

Before reaching the Lion and the Lamb, you come to the true summit of Helm Crag, this is an impressive feature known as ‘The Howitzer’ from it’s shape. If you want to truly be at the highest point on Helm Crag you need to climb to the top it. While I was there I saw a young walker attempt it. He made it to the top very swiftly. His girlfriend stayed firmly at the bottom. Now, I know what you are now all wondering…did I climb it?? The answer is a firm no! And below you can see why. It is a big drop from the other side! A short way further on and you come to the Lion and the Lamb. They are not so clearly identifiable from up here. Do you think you can see them? 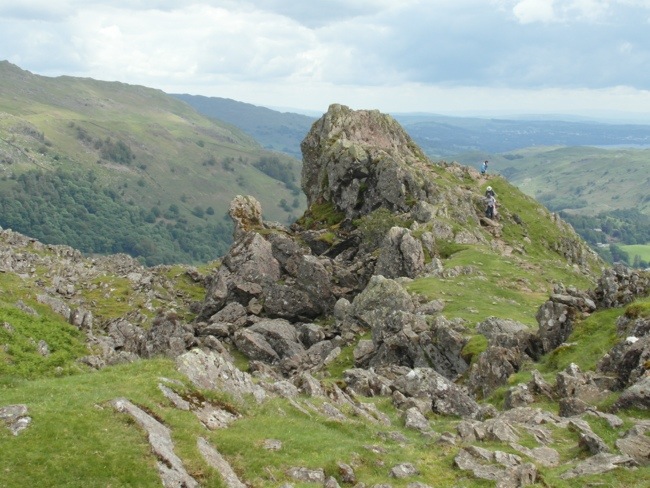 There were some lovely views down to Grasmere. 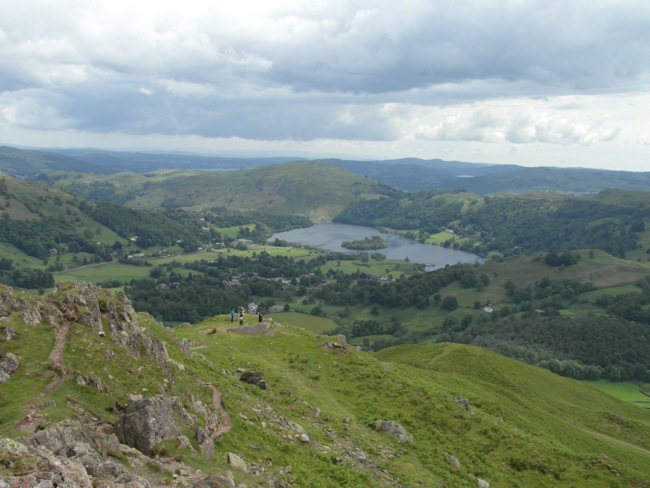 And across the valley to Easedale Tarn. It was now time for the steep descent down to Grasmere.

No, these are not bin bags! 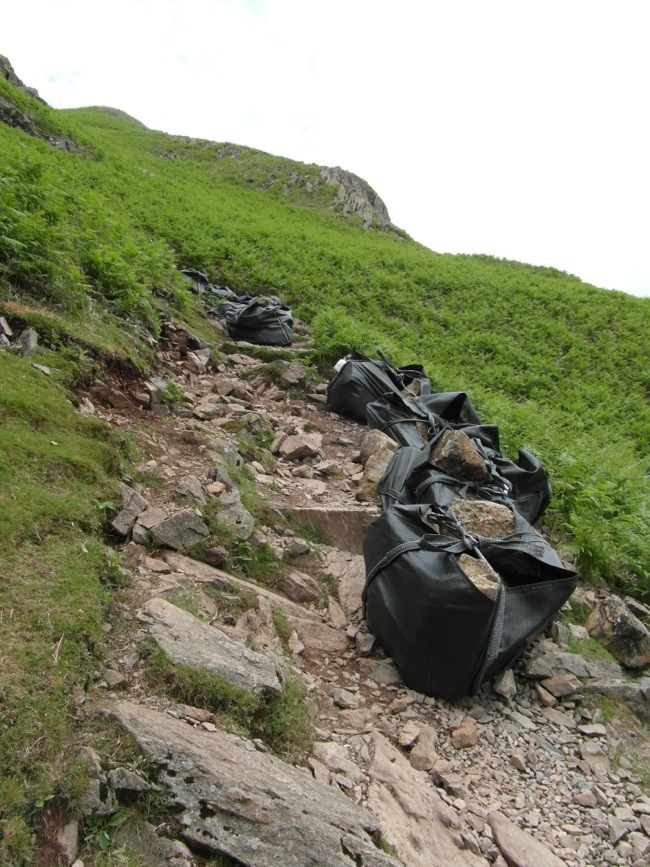 They are bags filled with large stones, which the National Trust will use to repair the path, badly damaged by the number of walkers going up and down. This happens all over the Lake District. They fly the bags of stones in by helicopter. I actually saw it happening once near Buttermere.

And here is a section they had already done. 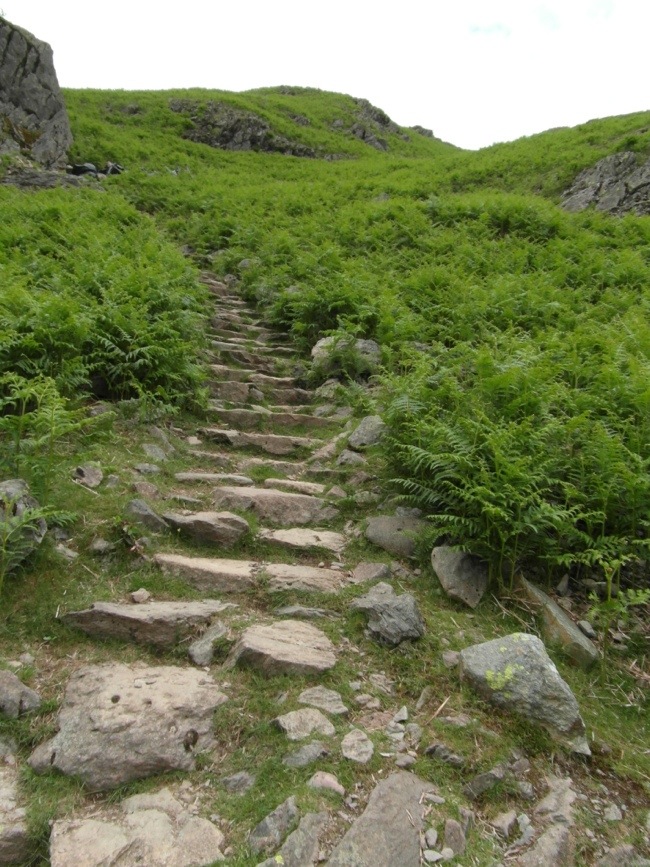 There followed a nice walk along the end of the Far Easedale Valley into Grasmere. On entering the village, I soon found the Lancashire Three sitting outside a cafe enjoying tea and cake…again. You may remember I left them on Day Two at the Youth Hostel in Borrowdale doing the same thing.

After a lovely pub meal with Manhattan Pete, I made the most of the gorgeous evening (note the blue sky – pity it didn’ t last until the morning) to have a wander around the village of Grasmere. It was unusually quiet, all the tourists having seemed to have gone home or moved on. I took these photos of the lovely church and the graves of William and Dorothy Wordsworth, who lived nearby in Dove Cottage. You may be wondering how my body is holding up to the walk so far, especially my feet. I am pleased to report that I have no significant blisters (the bathing in tea must have helped). My two big toes get a little sore by the end of each day, but they are well protected with preventative blister plasters. My shoulders tend to be a bit achy in the evenings from carrying the rucksack, but by far the worse problem is that midges have decided to make a meal of meal of me! My forearms are covered with bites, I counted 15 on one arm. I also have some bites on my head and neck. Nobody else seems to be suffering with them, so I think I must have especially tasty blood. They itch like crazy!

Anyway, I will conclude now, as I have a another blog to write this evening!