First priority after breakfast was to visit the chemist and see what I could get for my for my itchy bites. They gave me some anti-histamine tablets, which I need to take three times a day. They have been working, but they are really itching as I type this, so I think I must be due the third one. All of this set me back some way, so most of my usual fellow walkers started out well before. After a little walk alongside the A591 I arrived at the bridleway marked for Patterdale. It wasn’t long before I saw a walker ahead of me. 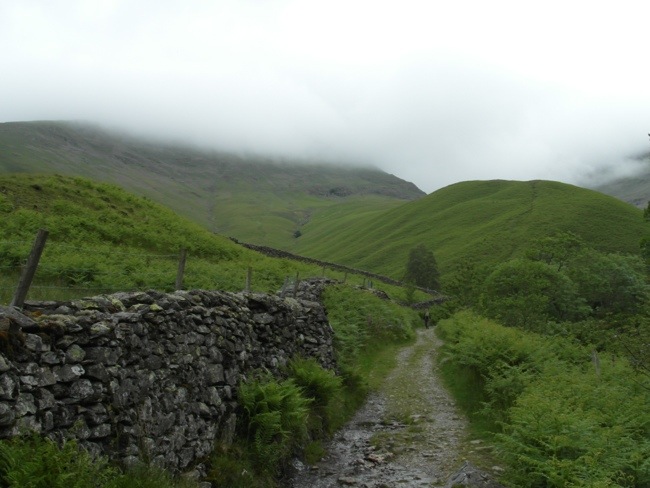 It turned out to be Luke, who I had met briefly on Day Two, but whom I hadn’t spoken too much. He disappeared around the corner.

When I rounded the corner, I saw the Lancashire Three just ahead of him. We greeted each other warmly and I was introduced to Luke. Others had walked with him previously and I had heard that he was Swedish and that he was a keen photographer and had an expensive camera with him. Well…he turned out to be Dutch! So now, I have Dutch Luke to go with Dutch Matt. With John from the Lancashire Three, I only need a Mark to complete the four Evangelists! The bit about the camera was right though.

As we climbed higher, there were some lovely views back towards Grasmere. We took the higher Little Tongue Gill route up the fell. 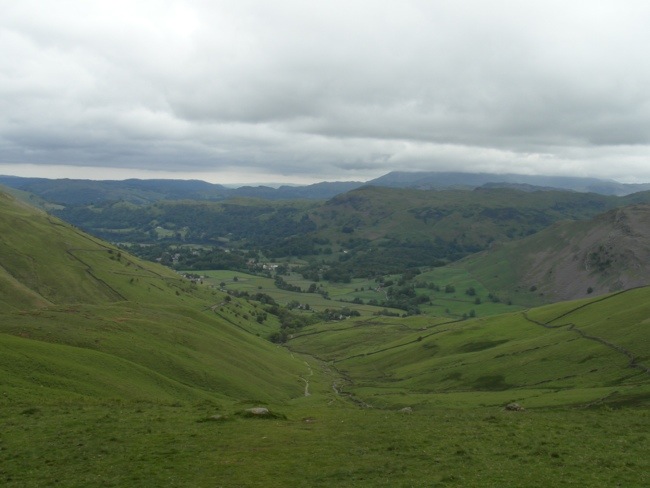 Once again, there were lovely waterfalls to admire. 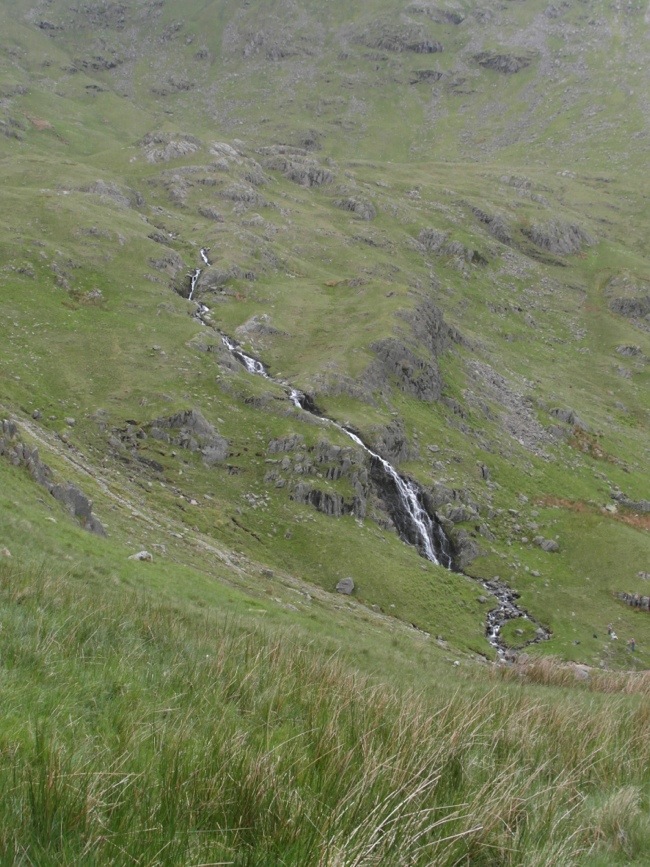 Heading ever upwards towards Grisedale Tarn. I chatted to the Lancashire Three and they told me that they had had more cake when they got to their guesthouse in Grasmere (after I had seen them outside the team room). I joked with them that I needed to get the cake theme into their “handle”. John helpfully suggested “The Cake-to-Cakers”. Perfect! 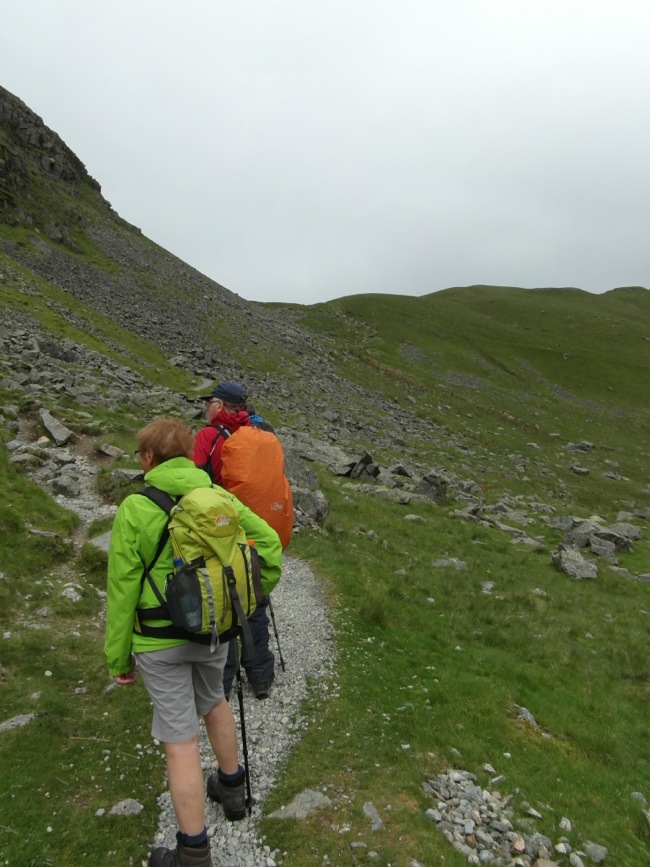 And there ahead of us was the beautiful Grisedale Tarn. Even on a grey day like this, still set like jewel among the mountains. 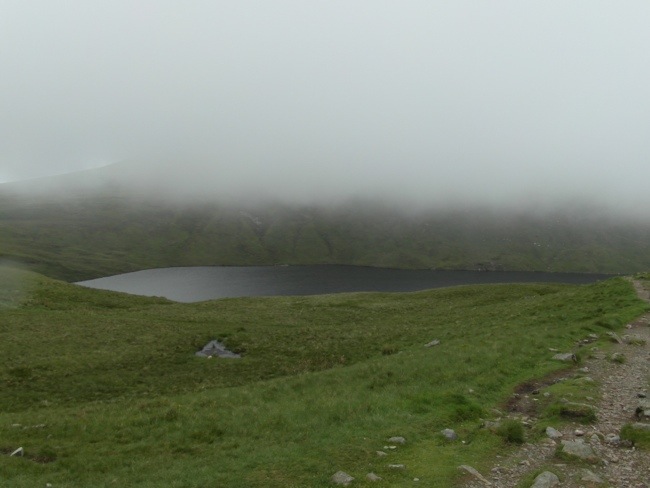 We made our way to the end of the tarn, and photos were taken both of tarn and of each other. 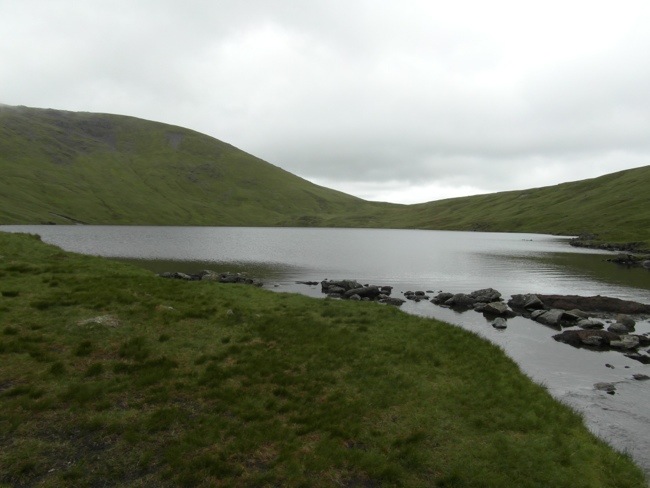 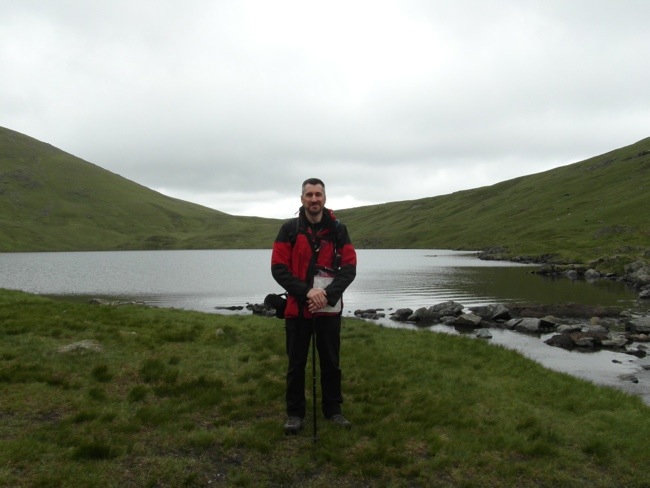 Here, another decision was needed. The most direct route is straight down Grisedale to Patterdale, a relatively easy descent that would have had me down in Patterdale by late lunchtime. the other option: to do one of the two alternative high level routes that Wainwright recommends – either Helvellyn, which I have climbed several times or St Sunday Crag – which I have never climbed. The latter won out. Why, you might ask? Well, I am trying to climb all 214 Fells that Wainwright includes in his 7 pictorial guides to the Lakeland fells. This is called “bagging the Wainwrights”. I only started to think seriously about completing them over the past couple of years. So far have have climbed about 90. (Note to self: Shaun, are you taking this bagging thing seriously enough, if you don’t even know exactly how many you have done)?!

Anyway, St Sunday Crag was calling. The Lancashire Three and Dutch Mat decided on the more direct route down via Grisedale. My route headed off and up to the right. With telephoto on max, I was able to get this close up of the Lancashire Cake-to-Cakers heading down. 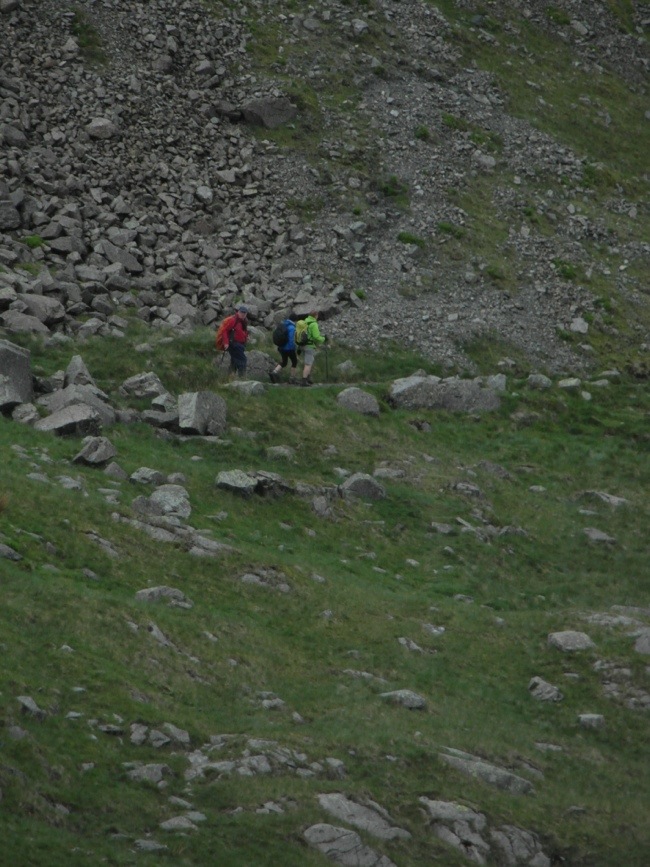 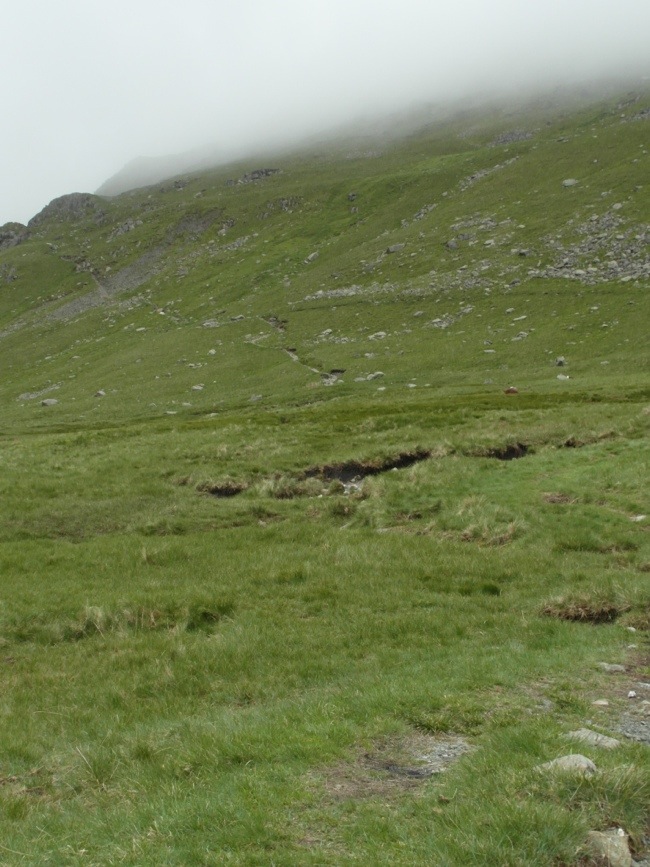 I had some lovely views back down to the tarn as I climbed. 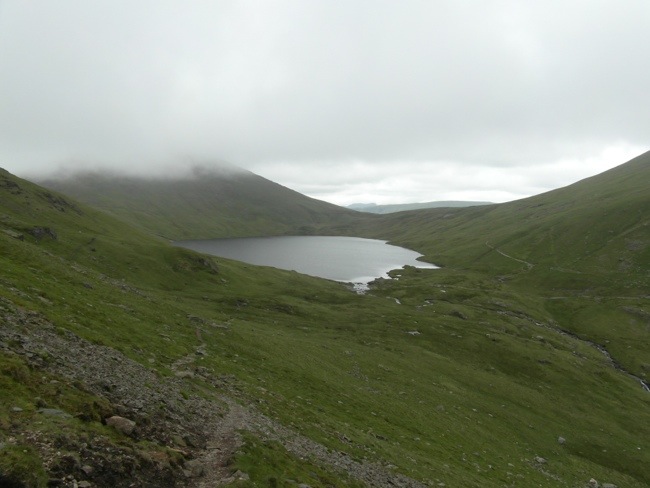 Eventually my path brought me to the ridge that joins St Sunday Crag with Fairfield. By now I was engulfed in mist all the way to the summit, which was marked by a small precarious-looking cairn. I stopped for lunch here. It was chilly, so the wooly hat and gloves went on. There were a few other people at the summit, but none of them were C2Cers. 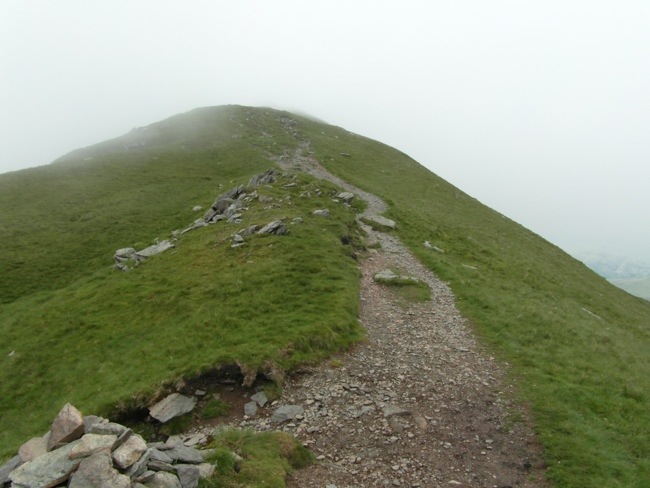 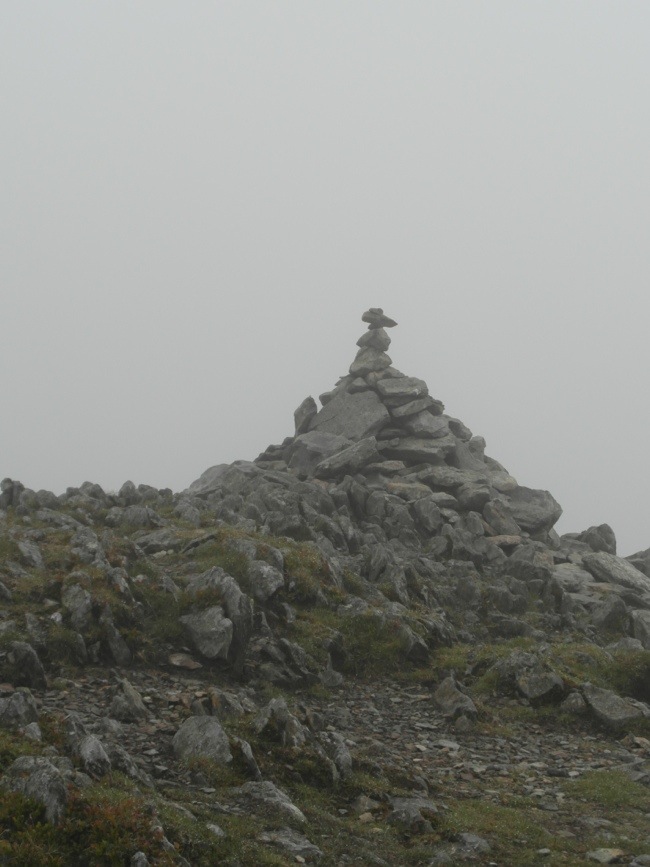 I headed down along the ridge and gradually came down out of the cloud. Ahead, I saw a grassy fell rising up. I looked at the map and worked out that it was Birks. I couldn’t remember if Birks is a Wainwright, so I texted my good walking friend, Paul, who completed all 214 Wainwrights last year. He confirmed that it was indeed. So I headed up the grassy slope and gained my second new Wainwright of the day! (Thanks Paul, btw, for flagging up my blog on your regular blog.) 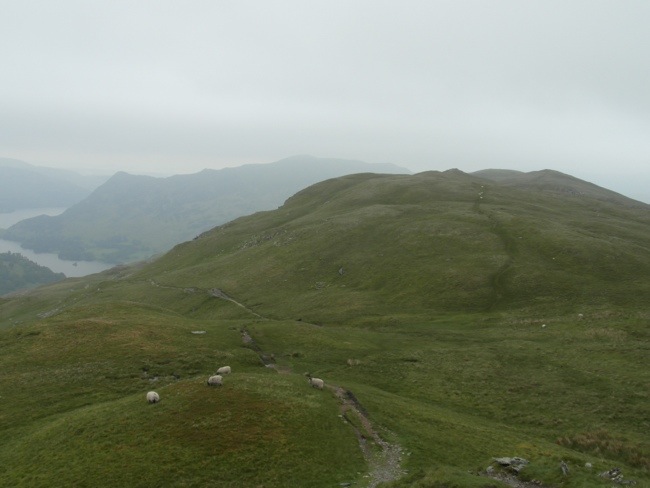 Beautiful views of Ullswater opened up before me on the way down to Patterdale. 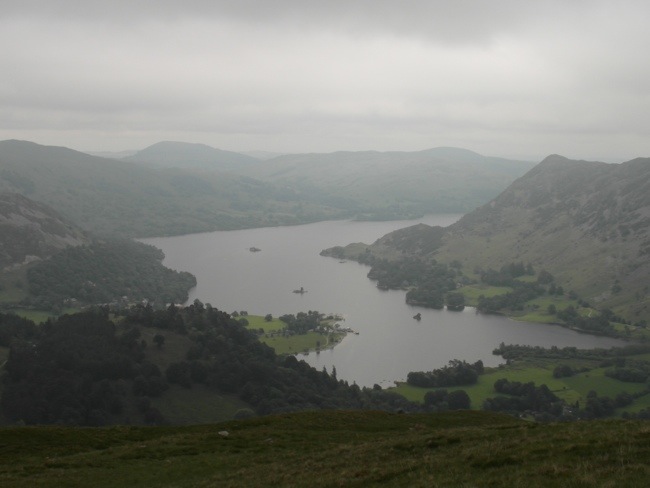 On reaching the road I met a new couple of American C2Cers I hadnt met before, Kurt and..I wish I could remember the lady’s name. We talked about the people we had met. They too had met Manhattan Pete on Day Two. Further on I ran into Dave and Barbara, who told me that Pete had done the same route as me and was now in the White Lion tucking into a plate of fish and chips!

My accommodation tonight is rather special, I am staying at Old Water View where Wainwright always stayed when in Patterdale, including when researching the C2C. You can see his name below, in the, now framed, Guest book. 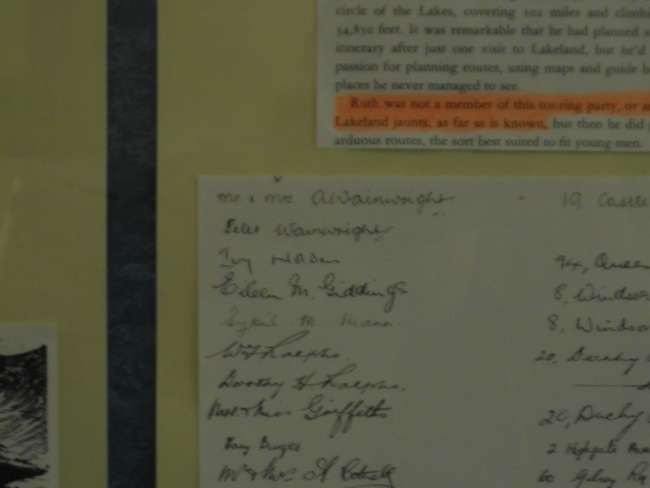