We took onboard the advice of the old guy (see Day 14) on 3 of the 4 counts.  Unfortunately the “no naughtiness” bit proved a problem as Steve’s desires got the better of him again and he had to have another sticky toffee pudding!

This was an absolutely beautiful summer’s day to see us through the final day of walking.  We received another tip off from our new friends of last week and did a minor detour to avoid waist-level swamps which cost them a walking pole (surrendered to the mire).   This added a mile to the journey but it was well worth the effort.

By the time we reached the coastal path we were really starting to flag as the cumulative pounding began to take its toll.  This proved to be our toughest day’s walk but we weren’t going to give in now!  The sea on approach was like a mill pond.  Neither of us had ever seen it so calm.  Robin Hood’s Bay was the busiest we had ever seen with the beach full of holiday makers and weekend fun seekers (or were they here to welcome us home?). 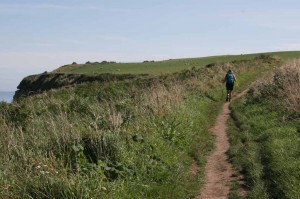 We followed the time-honoured tradition of dipping our boots in the North Sea and throwing our pebbles, collected from St Bees beach, into the sea.  We made haste to Wainwright’s Bar in order to celebrate with a pint and sign the book, only to find it closed!  Ah well, ice cream it is then.  PS.  We returned to the bar later that evening to record our achievement, in the C2C book, for all to see. 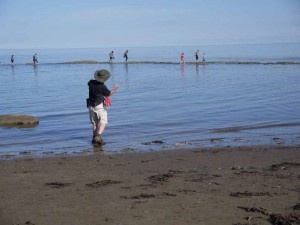 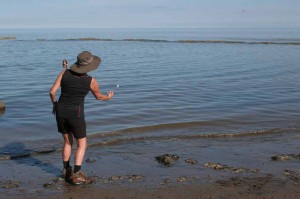 We are semi-keen walkers who are lucky enough to find ourselves with the time to embark on (and hopefully the energy to complete) a long held ambition to stroll across the breadth of England, without having to worry about previously limited annual leave. We are totally new to this blogging malarkey so will hopefully learn as we go.
View all posts by Steve & Cep →
This entry was posted in Uncategorized. Bookmark the permalink.